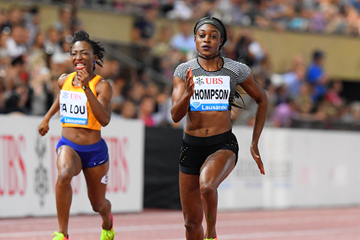 Elaine Thompson made good in her new role as the world’s premiere female sprinter after her dominating 100m victory at Lausanne’s Athletissima meeting, the 11th stop in the 2016 IAAF Diamond League, on Thursday (25).

Unfazed by an initial confusing start that forced a second running of the race, the double Olympic champion blasted away from a tight field just beyond the 50-metre point to win convincingly in 10.78.

“There was a mix up at the start, so to be able to produce 10.78 on the second attempt is a great time,” said Thompson, whose 100m and 200m triumph in Rio marked the first women’s Olympic sprint double victory in 28 years. “I’m looking forward to the remainder of the season.”

Thompson is also looking forward to returning to Jamaica where celebrations of her double triumph await.

“I’m the same person I was before the Olympic Games. The reality of being double Olympic champion has not really sunk in.”

It’s probably a feeling that will come when she finally lands in Kingston but first comes a showdown against Dafne Schippers in Brussels for the 100m Diamond Race.

USA’s Jenna Prandini was a distant second in 11.11, ahead of compatriot Morolake Akinosun who was third in 11.16.

Thompson’s run stole the thunder from Kendra Harrison’s return to action in the 100m hurdles, her first appearance since her stunning 12.20 world record in London one month ago.

The 23-year-old US hurdler, who didn’t run in Rio as she only finished sixth at the US Olympic Trials, didn’t disappoint.

Despite a lacklustre start, Harrison was clearly ahead by the midway point and forged onwards to a 12.42 victory. She has equalled or surpassed that mark four times already in 2016, and is eager to add to that number.

“I’m a bit rusty because I haven’t competed in a few weeks with not being in Rio,” said Harrison, adding that she’ll only get back into her rhythm after another race or two.

“My main objective now is to win the next two Diamond League races and hopefully get another personal record.”

Dawn Harper Nelson, the 2008 Olympic champion who was also absent in Rio, was second with a season’s best of 12.71, just ahead of Jasmin Stowers, who clocked 12.75 to complete a top-three sweep for the USA.

Like Thompson, another Rio winner who carried her momentum to the shores of Lake Geneva was Dalilah Muhammad, who flew to a 53.78 victory in the 400m hurdles to cap her fairy tale season.

Great Britain’s Eilidh Doyle was second in 54.45 to extend her lead in the Diamond Race and partially make up for a bad run in the Rio final, where she finished eighth and last. Denmark’s Sara Slott Petersen, the Olympic silver medallist, was third in 54.98.

The top performance on the men’s side came in the evening-capping 200m which witnessed Dutch sprinter Churandy Martina power off the turn en route to a 19.81 win, a personal best at 32 years of age, taking him to third on the European all-time list. He beat Panama’s Alonso Edward, who clocked a season’s best 19.92.

“I’ve had some ups and downs this season but to end it with a national record, you can’t ask for more than that,” said Martina, who finished fifth in the event in Rio but was disqualified after crossing the line first at last month’s European Championships.

In the men’s 110m hurdles, Orlando Ortega edged Omar McLeod by just 0.01, winning in 13.11 to reverse their finishing order from Rio.

The pair exchanged the lead several times over the second half of the race with the Spaniard finally pulling away for good over the final few strides to secure the pole position in the Diamond Race ahead of the final in Brussels.

Off the Diamond Race programme, Asafa Powell notched his fifth 100m victory in Lausanne and his 97th sub-10 time when clocking 9.96 ahead of Ben Youssef Meite of Ivory Coast, who stopped the clock in 10.01.