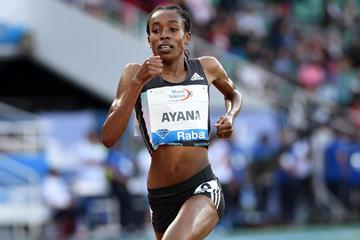 Almaz Ayana in the 5000m at the IAAF Diamond League meeting in Rabat (Kirby Lee) © Copyright
22 MAY 2016 Report Rabat, Morocco

The quality of her performance can be seen by the fact that it was the fifth fastest time ever. It would have been a personal best and IAAF Diamond League record for Ayana – who stands at third on the world all-time list behind her compatriots Tirunesh Dibaba and Meseret Defar – but for the fact that she ran 14:14.32 12 months ago in Shanghai.

However, it devastated the previous standards for the meeting record and African all-comers’ record, in both cases by almost 30 seconds.

For the first three kilometres, Ayana was on course to challenge the world record of Dibaba, which has stood at 14:11.15 since 2008.

No doubt Dibaba had a few anxious minutes about whether her mark would still be standing by the end of the day, presuming she was watching the race in her hotel in Manchester after winning over 10km there earlier in the afternoon.

The Kenyan pacemaker Lydia Wafula took Ayana, and the rest of the field, through 1000m in 2:50.06 and from that point the world record chase was clearly on.

Poland’s Renata Plis then did a brief stint in front, but Ayana had no one else who could take her much further than five laps and she took over at the front just before the 2000m mark, which she passed in 5:40.53.

As the yawning gap grew between herself and the rest of the field, with her compatriot and world silver medallist Senbere Teferi leading the chasers from a distance, Ayana passed 3000m in 8:32.33.

The world record was still a plausible target but the nagging feeling started to emerge that she might just end up a few seconds outside it. This was confirmed as she started to tire ever so slightly on the ninth and tenth laps, her cadence looking a little less smooth.

The 4000m split of 11:26.17 suggested that a terrific time was still going to be posted but that the world record had finally slipped out of reach.

But she finished with unofficially timed laps of 69.1 and then 66.2 to complete a magnificent near-solo display of distance running.

Kenya’s Viola Kibiwott, showing that her move up in distance is providing dividends, overtook Teferi at the start of the final kilometre and came home a distant second in a personal best of 14:29.50, almost four seconds faster than she had ever run before.

Teferi hung on for third in 14:35.09, shaving just over a second off her previous best. Kenya’s Janet Kisa and Ethiopia’s Ababel Yesaneh also posted personal bests, clocking 14:38.70 and 14:41.58 in fourth and fifth respectively.

Conseslus Kipruto put together another impressive 3000m steeplechase performance to take control of the Diamond Race in his discipline, following his win in Doha at the opening IAAF Diamond League meeting of the season, unleashing an impressive burst of acceleration over the final 200 metres to win in a world-leading time of 8:02.77.

It was also an African all-comers' record and the second-fastest time from the 2012 world junior champion who has yet to break eight minutes, although it seems just a matter of time before he joins that elite club.

Kipruto and his Kenyan compatriot Jairus Birech were out on their own over the final two laps befoe Kipruto shrugged off the 2015 Diamond Race winner coming into the last bend.

His turn of speed was so decisive, and his confidence high enough, that he had the luxury of waving to the 25,000-strong crowd as he came into the home straight. Birech, not threated from behind, finished second in 8:03.90.

In the non-Diamond Race disciplines, there were also three outstanding middle and long distance races.

Morocco’s Abdalaati Iguider got the hosts' only victory of the day in the main part of the programme when he sped to an African all-comers' 3000m record and world-leading time of 7:35.85.

Ethiopia’s Etenesh Diro dominated the women’s 3000m steeplechase and was in the lead from just before the halfway point in the race before finishing in 9:16.87, the second-fastest time of her career and the third-fastest time in the world this year.

Diro, fifth at the 2012 Olympics, heard the bell four seconds clear of her nearest rival, Gladys Kipkemoi, but the Kenyan wilted badly over the last lap before finishing second in 9:26.36.

In the men’s 1500m, Kenya’s 20-year-old Timothy Cheriuyot hit the bell in the lead and never relinquished pole position before winning in 3:33.61, taking more than a second off his previous best.

The seventh-place finisher at the IAAF World Championships Beijing 2015 was tracked all the way to the line by his experienced compatriot Silas Kiplagat, who finished two places in front of his teammate in the Chinese capital last summer, but the latter just couldn’t get past his rival and finished 0.07 in arrears.