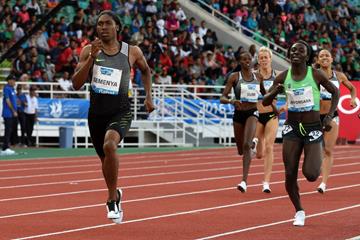 Caster Semenya in the 800m at the IAAF Diamond League meeting in Rabat (Kirby Lee) © Copyright
22 MAY 2016 Report Rabat, Morocco

Pacemaker Anastasiya Tkachuk took the field through the first 400m in 56.70 and then Burundi’s world indoor champion Francine Niyonsaba took the lead and tried to break away from the classy field.

Niyonsaba passed 600m in 1:27.92 but couldn’t shake off the lurking presence of Semenya, who overtook her 50 metres from home and then pulled away to finish just 0.05 outside of Niyonsaba’s IAAF Diamond League record set in 2012.

In the men's 800m, France’s Pierre-Ambroise Bosse surged a little earlier than Semenya did in the women's equivalent and hit the front coming into the final bend, just as the pacemaker Edwin Melly – who had taken the field through the first 400m in 51.17 – stepped to one side, and the move seemed to catch his rivals by surprise.

But the 2011 European junior champion possesses a formidable turn of speed over the final 150 metres of his preferred distance and was able to hold off the fast-closing Taoufik Makhloufi with relative ease, stopping the clock in 1:44.51.

Algeria’s Olympic 1500m champion finished second in 1:44.91 with Bosnia’s Amel Tuka, 2015’s fastest man over two laps of the track, third in 1:45.41, also finding out too late that he had been badly positioned when Bosse made his decisive move.

Another Botswanan to look a little limp was Isaac Makwala.

To be fair, the former African 400m record-holder ran a stunning race for 350 metres but he over-estimated how much was in the tank and struggled badly over the final metres of the 400m. Makwala could only glance grimly in either direction as LaShawn Merritt, immediately on his inside, and then Kevin Borlee to his outside passed him as he his legs turned to lead.

Merritt, who timed his race to perfection and afforded Makwala a sizable lead over the first half of the race, came through strongly to win in a meeting record of 44.66 while Borlee took second in 45.26, with the tiring Makwala third in 45.36.

Jamaica’s Janieve Russell produced a crisply executed 400m hurdles race to win in a personal best of 54.16, the second-fastest time of the year and her compatriot Elaine Thompson fulfilled her role as favourite in the women’s 100m when she sped to a meeting record of 11.02, despite running into a -1.3m/s headwind.

Thompson’s reaction was actually the slowest in the field and she was left with a good deal of work to do but in the final 30 metres the world 200m silver medallist started to put daylight between herself and the rest of the field, with Nigeria’s Blessing Okagbare a clear second in 11.11.

Panama’s 2015 Diamond Race winner, in lane six, was challenged off the bend by Ivory Coast’s Wilfried Koffi and Spain’s Bruno Hortelano-Roig, on his inside in lanes four and three, but had an extra change of gears in the final quarter of the race. Koffi was second in 20.35 while the Spaniard was 0.01 further back.

It wasn’t the prettiest or most efficient display of hurdling from 2013 world champion David Oliver, who tipped over five of his first six hurdles, but once the big man gets going he’s a powerful force to be reckoned with and he put together a strong final four barriers to win the 110m hurdles in 13.12.

It took Oliver until the final 30 metres to get on level terms with Spain’s Orlando Ortega but the latter had to settle for second in 13.13, although the time was just 0.01 outside his recent national record.