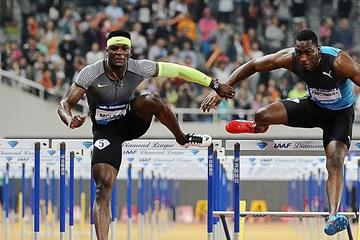 Who would have thought that without Chinese hurdling hero Liu Xiang present – not even for a farewell appearance – the IAAF Diamond League meeting in Shanghai would produce such a dramatic 110m hurdles? But that’s exactly what happened at the night-time meeting on Saturday (14).

Let’s jump to the end first: in the final race of the programme, Jamaica’s Omar McLeod ran his third outdoor world lead in as many races by taking victory in 12.98.

The 22-year-old has already become the first sub-13-second 110m hurdler to run under 10 seconds for the flat 100m, and all these bravura performances have followed on from his gold medal in the 60m hurdles at the IAAF World Indoor Championships Portland 2016 earlier this year.

At Friday’s preview press conference, McLeod had said that he welcomed the attention his new role as ‘the man to beat’ had drawn to him.

“There’s no pressure,” McLeod told a questioner. “I’m happy to be at this level.”

The ‘no pressure’ line faced a stern test in Shanghai.

As he had done at the first IAAF Diamond League meeting in Doha last week, McLeod faced a loaded field; world record-holder Aries Merritt, former world champions Jason Richardson and David Oliver, Hansle Parchment, Dmitri Bascou and Orlando Ortega were among those lining up alongside him.

Even without Liu, the hurdles occupied its traditional spot as the last individual event on the Shanghai programme.

The tension racked up a notch when Ortega was disqualified for a false start at the first attempt, then it went off the scale when Merritt was similarly ruled out after moving too soon following the second start.

Pacing his lane, trying to maintain his composure, McLeod grabbed a sip from his water bottle after the second false start – he could have been forgiven for wishing the bottle contained something a little stronger.

Jangling nerves or not, the Jamaican still had the quickest reaction time when the seven surviving members of the original field got away at the third attempt.

Parchment clung to him through the first half of the race, and even seemed to be taking some ground out of McLeod over the eighth and ninth hurdles.

If there was a challenge, McLeod repelled it impressively, taking the 10th cleanly and powering home the stronger on the run-in. His lean at the line took him to a time of 12.98, 0.07 faster than the time he ran in more favourable conditions in Doha, and just 0.01 outside the meeting record set by Liu in 2012.

McLeod confirmed after the race that his expectations had been sub-13, but admitted these were shaken by the two false starts.

“Before the race I expected to run a sub-13 time,” he said. “However, after two false starts it got a little cold and I told myself to stay focused and run safe.

“Because of this I did not expect to run this time. It’s the first time I have been in a race with two false starts. This is something you never experience in training.”

Parchment took second place in 13.12, repeating the 1-2 from Doha. Xie Wenjun edged Bascou for third, the two men both recording 13.34.

It is trite, but necessary, to say that the Olympic year is a long and arduous year. Certainties in May can become much less so by August, but Omar McLeod has certainly set out on his Olympic journey like a man on a mission.

In the men’s 800m, world champion David Rudisha was upset by fellow Kenyan Ferguson Rotich, a result undoubtedly affected by the confusion which reigned at the start of the race, when half the field hesitated after the starting gun. Rudisha was one of those, but despite losing several metres, he made his way to the front after 200 metres, and passed 400m just behind pace maker Bram Som, who went through in 52.68.

In the women’s 200m, two-time Olympic champion Veronica Campbell-Brown was beaten by Murielle Ahoure, who took victory in 22.72 ahead of Campbell-Brown’s 22.82.