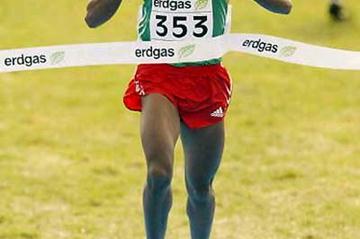 29 March 2003LausanneThe image of Kenyan endurance invincibility was struck a further damaging blow in the men's short course race at the 31st IAAF World Cross Country Championships when the defending Ethiopian champion, Kenenisa Bekele, retained his crown, despite partying the night before.

The 20-year-old, who uniquely won both titles last year, is now poised for a repeat double. The Ethiopian team seem convinced that he would also defend the long course crown on Sunday.

Bekele himself was less sure. He questioned whether he would have recovered sufficiently. "It was hard, and I am tired," he said.

His Dutch manager, Jos Hermens, had suggested he conserve energy by winning close home, and he followed that strategy today.

Bekele covered the 4030 metres circuit of the Swiss National Equestrian Centre near Lausanne in 11min 01sec, finishing three seconds ahead of Kenya's John Kibowen, with with Richard Limo third in 11:06.

Yet little over 500 metres from home, Bekele's diminutive figure was flanked by the Kenyans, and he drifted back into third before delivering a searing finish from 250m out.

Kenyan honour was partially salvaged, however, for they extended their reign as team champions to 18 years. Limo was followed across the line by Michael Kipyego and Thomas Kiplitany, giving them team gold with 14 points to 31 for Ethiopia. Morocco were third on 44. France were the leading European nation, fourth, but three of their counters were African-born, and two previously ran for Morocco.

Moroccan-born Spaniard, Yousef El Nasri, the former European junior cross-country champion, was the first official European finisher in ninth, but the first European-born runner to cross the line was Christian Belz of the host Swiss, immediately followed by Chris Thompson of the UK.

The Kenyan aura had initially cracked 12 months earlier, when Bekele destroyed them individually in Ireland.

It was said that the method previously employed by Kenya for final team selection, following their championships, had led to contenders for their final line-up cutting one another's throats in training. Their best form had been left in the camp at Embu, and they were over the hill by the time they arrived in Dublin.

They believed they had prepared better this time, but are still looking for an answer to Bekele, who must have demoralised his rivals even more, when he admitted he was still suffering the affects of recent typhoid.

Bekele had gone on an official IAAF dinner cruise the previous evening. He did not want to miss it, never having been on a boat before. He did not get to bed until after midnight.

Yet he was sharp enough to charge on the heels of the Kenyan leaders, through the opening kilometre in 2:35, and always staying close, alert to whatever tactic the Kenyans might essay.

Kibowen admitted they had had no specific plan, other than to live up to the national tradition of running in front.

So beating Bekele should be easy. All one has to do is stay in front of him.

Doug Gillon (The Herald) for IAAF