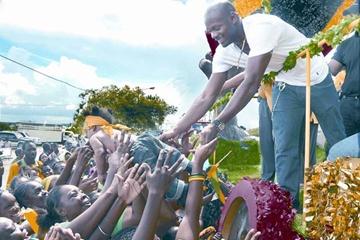 The Caribbean island of Jamaica has kicked off nearly a week-long series of events to officially recognise the achievements of their athletes in the Beijing Olympic Games.

Six weeks after its athletes achieved their greatest ever Olympic medal tally of 11 medals - six gold, three silver and two bronze - the government has invited the athletes home for special celebrations.

The celebrations kicked off on Friday (3) as the athletes were paraded through the streets of Kingston on the backs of flat bed trucks as thousands lined the route which began at Norman Manley International Airport to the east of the island’s capital, to get a view of their sporting heroes.

The entire team was then feted at a gala fund-raising dinner at the impressive Strawberry Hills complex just outside of Kingston on Friday night, dubbed ‘Dining with the stars, under the stars’.

The trucks carrying the athletes in the parade were decorated with the national colours of green, black and gold as well as large photos of the athletes. Television stations showed replays of the track and field finals from the Olympics, while radio stations gave live updates of the procession along the route.

The scenes of rejoicing were similar to those witnessed when triple gold medallist Usain Bolt arrived home about four weeks ago, with thousands abandoning whatever they were doing to line the sides of the roads, to such an extent that the free flow of traffic was prevented at major road intersections. Many of the supporters waved national flags while others were dressed in the national colours.

"whatever your dreams are you must work and make the sacrifices"

A hoarse sounding Melaine Walker, the women’s 400m Hurdles gold medal winner and women’s 100m champion Shelly-Ann Fraser both expressed surprise at the turnout as they rode on one of the trucks. “I can’t even begin (to express her feelings),” said Fraser, “I was not expecting anything like this.”

Walker who as unbeaten in the 400m Hurdles all season said the recognition was good for the sport in the island. “This is a good boost for track and field as many youngsters have been coming up to me and asking what they can do to run as fast as I can. I told them I would do anything to help them but they must be prepared to sacrifice and work hard.”

Kerron Stewart, one of the joint silver medallists in the women’s 100m and the bronze medallist in the 200m was elated, “Oh my god it is overwhelming, this is what we work for,” she told a live television audience from the back of one of the trucks.

Stewart the national 100m champion said the young people must strive for what they want, not just in sports, “We are more than sports, whatever your dreams are you must work for it and make the sacrifices.”

Looking back to the finals of the 100m, the pre-race favourite said she was affected by a false start by American Torri Edwards but added, “that is over and done, what is important is what happened at the end of the race.”

200m champion Veronica Campbell-Brown who was one of five athletes who returned to the island on Thursday night (2) said she was “happy to be home and I really appreciate this turn out of the fans.” Also arriving on Thursday were Stewart, hurdles finalists Richard Phillips, decathlete Maurice Smith and men’s 4x100m relay runner Dwight Thomas.

Order of Jamaica bestowed by government

A number of Jamaican medal winners were on Saturday (4) given national awards at a civic ceremony held at the national stadium.

Additionally coach Glen Mills, 1976 Olympic Champion Donald Quarrie, and Howard Aris, President of the Jamaica Amateur Athletics Association were also honoured with the Order of Jamaica by the government.

Saturday’s function was one of two at the national stadium which included a spectacular gala at which all the athletes were presented to a crowd of close to 20,000 cheering fans.

Each of the female medal winners were paraded into the stadium in varying modes of transportation, 100m silver medalist Sherone Simpson in a vintage MG sportscar and 100m and 200m winners Fraser and Campbell-Brown in hand drawn carriages pulled by bare-chested body builders!

The members of the Jamaican team will now make visits to their high schools on Monday (6) and on Tuesday (7), and will be paraded around the western end of the island from Montego Bay to Falmouth, home of Bolt and 200m runner Marvin Anderson.

The events end on Wednesday (8) with another gala at the Trelawny Multi-purpose stadium.

Paul Reid for the IAAF