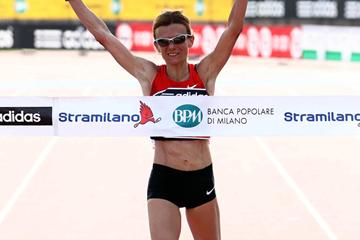 Jarso and Straneo beat the heat at the Stramilano

Milan, ItalyYacob Jarso from Ethiopia and Italian Valeria Straneo took the honours at the 37th edition of the Stramilano held on a sunny and warm day.

Jarso beat a very competive Andrea Lalli from Italy in a hard-fought men’s race which was decided in the final 800 metres. The Ethiopian, fourth at the Olympic Games in Beijing 2008 and fifth at the IAAF World Championships in Berlin 2009 in the 3000m Steeplechase, beat the former European Under 23 and Junior Cross Country champion by four seconds in 1:01:07.

The women’s race was billed on the eve of the event as an Italian battle between Marathon runners Valeria Straneo and Anna Incerti who are two of the four candidates to make the Olympic team for London. Straneo, who clocked an impressive 1:07:46 at the Roma Ostia Half Marathon which cannot be ratified as the Italian record, beat European Marathon silver medallist Anna Incerti in 1:08:48, a good time considering the warm conditions at the end of the race. Incerti repeated her second place from last year clocking 1:10:36.

A five-man group with 19-year-old Kiprop Limo from Kenya (59:55 at the Roma-Ostia), Jarso, Lalli, Kenyan Geoffrey Gikuni and Uganda’s Martin Toroitich set off at a fast pace going through 5 km in 14:24. The group was whittled down to just three men - Lalli, Jarso and Limo - at 10 km which was reached in 28:46. At 13 km Jarso took the lead with Limo but Lalli ran a brave race and managed to keep with the Africans. The Italian, who has learnt a lot from running with twice World champion Abel Kirui and other top Kenyan runners in Kenya this winter, took the lead after the 15 km (reached in 43:22) and only Jarso managed to follow him, while Limo lost ground and was dropped.

The warm temperature took its toll in the final part of the race. Lalli remained in the lead for three kilometres but Jarso was in close pursuit. The Italian cross country specialist, who is coached by former 3000m Steeplechase runner Luciano Di Pardo, launched his kick with 800 metres to go but Jarso responded quickly and unleashed a devastating kick and held off Lalli at the entrance of the Arena Civica Gianni Brera.

Jarso, who ran his Half Marathon PB of 1:00:07 in New Dehli in 2010 when he finished third, romped home in 1:01:07. He started as a world class steeplechaser but after moving to Japan some years ago he opted to pursue his international career on the road.

Lalli underwent Achilles tendon surgery last year after finishing sixth at last year’s Stramilano in 1:02:32, smashed his PB to 1:01:11. “I feel I am a stronger athlete after the surgery. I am more mature. I expected to run 1:01:40,” Lalli said. “As the pace was not too fast I managed to keep the pace with the Africans until the 15 km and from then on my focus was not to run a fast time but to finish in the top three. I made the mistake to launch my kick too soon with 800 metres to go. I will leave for Arizona on 3 April and will go for the 27:45 qualifying standard for the Olympic Games in London in the 10,000 metres race in Stanford (California) on 29th April. My distance for the future is the Marathon where I will make my debut next autumn.”

The last Italian to finish on the podium at the Stramilano was 2004 Olympic Marathon champion Stefano Baldini who finished third in 2006.

Valeria Straneo and Anna Incerti went through the 5 km mark in 16:10 running inside Italian record pace (1:08:27 set by Nadja Ejjaffini last autumn in Cremona) and ran a neck-and-neck race until the sixth kilometre when Straneo dropped Incerti. Straneo carved out a gap of seconds over Incerti at 10 km (32:20 to 32:42).

“At the Roma-Ostia I felt much better and hoped to run faster today but I worked very hard increasing the training volume ahead of next April’s Rotterdam Marathon,” said Straneo who made a major breakthrough last September when she clocked 2:26:33 at the Berlin Marathon. “I underwent surgery to remove my spleen in 2010 and this was the turning point in my career,” added the 35-year-old, who is a mother of two children.

“I needed a lot of time to recover from the Roma Ostia and recently I had flu but finishing second at the Stramilano in such a prestigious event is a good result,” Incerti said.

Leading Results from the Stramilano: