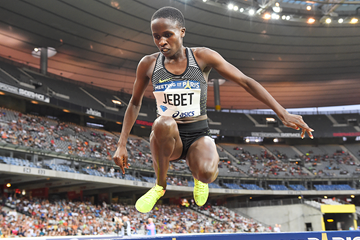 Her time of 8:52.78* shattered the previous mark of 8:58.81 set by the Russian at the 2008 Olympic Games in Beijing, and remarkably is the third sub-nine-minute clocking of the season for Jebet, who took the Olympic title in Rio 12 days ago.

At the pre-competition press conference, Jebet had played down suggestions she could break the mark. But with the pace going out faster than planned, it was clear that something special was in the hot, still Parisian air.

Caroline Tuiging paced the leaders through the first kilometre in 2:56.36, by which time the pack was spread right out behind the lead group of Jebet, Hyvin Kiyeng and second pacer Aisha Praught. Jebet had taken over by the second kilometre, which they passed in 5:54.16.

As they hit the bell in 7:50 the record was in sight, but required a faultless closing lap. That played out until the final barrier, where a slight clip almost threw Jebet to the ground. Yet she recovered, found her stride and celebrated wildly as she crossed the line.

“I’m very happy,” the 19-year-old Bahraini said. “I tried many times to beat the world record, and today we decided to push each other to go for a good time. I was not expecting such a big difference with the record. I think I finished my season today.”

What a way to do it.

Second and third were as they were in Rio: Kiyeng, who had run alongside Jebet until three laps remained, finished in 9:01.96; US record-holder Emma Coburn closed strongly for third in 9:10.86. There were four personal bests behind those three, including a 9:14.28 Oceanian record for Genevieve LaCaze in sixth.

Abdalaati Iguider had opened up a 15-metre gap as he hit 2000 metres in 4:59.20. The effort he expended by sticking to the pacemakers would cost him, though. The Moroccan began to labour at the bell, at which point the tall figure of Kejelcha had already cut the gap, looking strong. The 19-year-old Ethiopian moved into the lead with 150 metres to run, collapsing over the line in the fastest time of the year.

Iguider was able to hold for second, earning a personal best of 7:30.09 for his troubles. A further seven lifetime best times came through behind, including a Bahraini record 7:32.02 for Albert Rop.

Kenya’s Alfred Kipketer showed no signs of Rio fatigue as he took the win in the men’s 800m in a personal best of 1:42.87, the third fastest time in the world this year.

After being led through the first lap in 50.07 – at which point USA’s world indoor champion Boris Berian pulled up with a hobble – and hitting 600m in 1:16.37, Kipketer took up a position wide with Pierre-Ambroise Bosse of France tight to the rail.

That wide line looked to have cost the Kenyan with 50 metres to go as Olympic silver medallist Taoufik Makhloufi found space on the inside. But Kipketer held to take his second consecutive IAAF Diamond League win ahead of Makhloufi.

His fellow Kenyan Ferguson Rotich was fourth in 1:43.43, and now leads the Diamond Race standings going into the final event.

The women’s 200m came right after Jebet’s world record run, though didn’t see anything like the fireworks that had preceded it on the track.

World champion Dafne Schippers was the liveliest out of the blocks, holding a slight lead over her training partner Desiree Henry as they hit the straight.

Jenna Prandini of the US threw the burners on and looked like she might challenge Schippers at the close, but her legs tied up and the Olympic silver medallist was able to coast home for the win in 22.13.

“This race and this victory were really important to me,” said Schippers, who said she was tired from Rio and has trained only once since returning to Europe.

A fading Prandini was pipped by just 0.02 by Henry, who recorded a personal best of 22.46 to take second. Schippers’ win was her second of the 2016 IAAF Diamond League, and gives her an insurmountable lead in the overall rankings with just one race left to run.

The men’s 100m closed the night, and saw Ben Youssef Meite equal the Ivorian record to win in 9.96. It was an entertaining race, with all eight neck and neck as they hit half way.

Meite began to pull away in the closing 20 metres, and was the only man across the line in under 10 seconds. South Africa’s Akani Simbine finished second in 10.00, just ahead of European champion Churandy Martina.