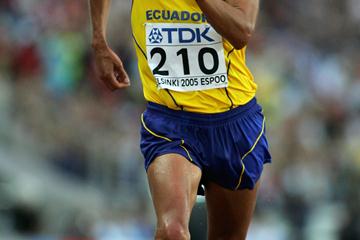 In sports, the task of judging the career of an athlete when he retires sometimes becomes difficult, but with Ecuadorian Jefferson Pérez the issue is rather simple. Pérez has been the best sportsman ever produced by the so-called “Nation of the middle of the Earth”.

If we extend the valuation to Athletics in the South American continent, only a handful of names will rank along the Ecuadorian race-walker – both Brazilian. Double Olympic Champion Adhemar Ferreira da Silva (Triple Jump; Helsinki 1952-Melbourne 1956) and 800m runner Joaquim Carvalho Cruz (Olympic gold in Los Angeles 1984 and silver in Seoul 1988).

With Pérez’s recent silver medal in the 20Km Race Walk from Beijing, and added to the gold he obtained in Atlanta 1996, the Ecuadorian is equal in Olympic achievements with Cruz and behind da Silva. But, extending the healthy debate, Pérez won three IAAF World Championships at his event, fact that Cruz couldn’t do, and neither Adhemar, for the obvious reason that the World Championships were first contested in 1983. And while Adhemar also possessed the World Record, so did Pérez, and not Cruz.

At the end of the hypothetical debate, it becomes obvious that we are talking about serious champions with a legacy that will be remembered by many generations, and certainly, Jefferson Pérez belongs to that illustrious group.

The making of a champion

Jefferson Pérez was born in Cuenca, on 1 July 1974. The second of five siblings – three male and two female – Jefferson became involved with Athletics in 1986 when he saw on television the victory of compatriot Rolando Vera (also from Cuenca) at the São Silvestre road race in São Paulo. That clearly inspired the young Ecuadorian.

His first major event was the South American Junior Championships held in Montevideo in 1989. There, still only 14, the young Pérez won the 10,000m in 45:03.71, starting his glorious campaign.

Also at the age of 14, Jefferson lost his father, and with his mother gradually going blind, he was able to find the inspiration for his sports career.

“I always say I was exposed to everything at my youth, crime, drugs, you name it… But I guess I was signed for something different, and that kept me away from all those temptations that usually present themselves to young kids.”

Pérez’s first global impact came in 1990 at the World Junior Championships in Plovdiv, Bulgaria. There Jefferson placed third at 10,000m with 40:08.26 at 16, setting a World Best for his age. “That was an occasion that marked me for the rest of my career. We got to Bulgaria a few months after the fall of the Berlin Wall, and things were not easy yet. Our luggage got lost, and it was impossible to purchase clothes to train. So we had to borrow stuff from other athletes, wash things after every session, hoping that they would get dry for the next training session. Luckily our bags arrived the night before my event, but certainly it was one of those episodes that tempered my character.”

Two years later, at the 1992 World Junior Championships in Seoul, Pérez claimed the victory at 10,000m, a fact that solidified his career.

After the initial experience at the 1992 Olympic Games in Barcelona, were the young Ecuadorian abandoned, his career began to evolve dramatically.

The first milestone achieved was the first-ever gold medal for his country at the 1995 Pan-American Games of Mar del Plata. Later on, Jefferson would repeat the feat in 2003 and 2007, with a bronze in 1999.

The next year, at the 1996 Olympic Games in Atlanta, Pérez shocked the world by taking the victory. In the morning of 26 July, the roads of the capital city of the state of Georgia saw the 1.74m Ecuadorian march to a historic gold medal, in 1:20:07.

In 1997 Pérez won the Race Walking World Cup in Podebrady, with 1:18:24, then a South American record. The victory at the event would be repeated in 2002 and 2004, with a second place in 2006, becoming the athlete with most victories and medals in the history of the Cup at 20Km.

After a fourth place at the 2000 Olympic Games in Sydney, Pérez took a break to complete his University studies and graduated in Business Administration. At his return, he placed eighth at the Edmonton World Championships in 2001, and from there regained inspiration to continue competing at the highest level.

The victory at the 2002 World Cup in Turin was the clear indication that Pérez was back, and 2003 saw the finest performance by the Ecuadorian.

“The victory at the Paris World Championships was the most important of my career. I was up against the best in World at the moment – Spain’s Paquillo Fernández – almost competing at his home turf. He was coming from setting the World record and went out very fast, covering the first 10km in 38:38. I could only follow him, and I crossed the middle mark in 39:10. But little by little I was able to catch up with him, and marching the second half in 38:11 I took my first World title, setting a World record of 1:17:21.”

“Things didn’t go right in Athens, at the 2004 Olympic Games, and again I finished fourth. I guess that was a necessary defeat… It made me more humble, and gave me the drive to repeat the victory from Paris in Helsinki 2005 and Osaka 2007”.

Pérez’s final year at the world stage gave him his second Olympic medal, silver, at the 2008 Games in Beijing.

“I guess I was part of two generations of race walking. The one from the 90’s, of Segura, Markov, Shchennikov, full of grit and determination, which I deeply admired, and I called the “Romantic Generation”. Then came a second one, more influenced by science and technology; more professional, if the word applies.”

Beginning his next chapter

Now, that a new chapter in his life begins, Pérez doesn’t see himself coaching or advising other athletes directly. “I will continue working with my foundation to help children with difficulties; I will continue with my business, and although many people want to see me in politics, I understand that will take me some time to be ready for that challenge.”

“Paquillo Fernández would be an ideal successor for me in Race Walking. He is still young, talented, and has a great teacher in Robert Korzeniowski. I wish him the best.”

“Here in Ecuador, we have our own talents, but our athletes need direction. The National Olympic Committee has asked me for advice, and I will be glad to give my best to help, along with my team of physicians. I know I don’t make a great coach. I have little patience, and I know I was too tough with myself, which is something I cannot apply to others.”

“I won’t be nostalgic about athletics now. I enjoyed my moment, and even the farewell in the streets of Murcia at the Race Walking Challenge Final, was a wonderful moment. Competing there, and saying goodbye in front of some many compatriots who live in Spain is something that I will treasure for ever.”