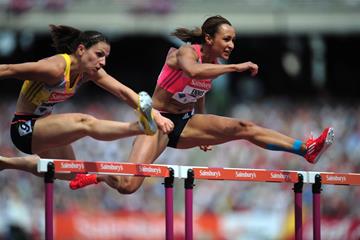 Jessica Ennis-Hill will return to the Olympic Stadium in London this summer to take part in the Sainsbury's Anniversary Games on 24-25 July, an IAAF Diamond League meeting, organisers announced on Tuesday (14).

The 29-year-old is synonymous with the London 2012 venue after clinching heptathlon gold on 'Super Saturday', when British team-mates Mo Farah and Greg Rutherford also topped the podium.

Ennis-Hill, who also won the 2009 world heptathlon title, has not confirmed which events she will compete in as she builds towards the Rio Games in 2016 having missed the majority of last season after giving birth to her first child.

In fact, her last competition was in the Olympic Stadium when she competed in the 2013 IAAF Diamond League meeting before injury curtailed her season and her hopes of defending her world title.

“I am really looking forward to the Sainsbury's Anniversary Games in the Olympic Stadium,” she said.

“My race schedule is starting to take shape and it will be good to compete and get a sense of where I am in my return to competing.

“My main goal this season is to be as competitive as possible with the long-term goal being the Rio Olympics.

“Diamond League meetings always have the best athletes in the world so I'm sure this will be a good test for me.

“I want to perform well being back on the big stage in London but I will be realistic as 2015 is about the challenge of getting back to competitive shape after having my little boy and ultimately making the necessary progression to be at my best for Rio.”