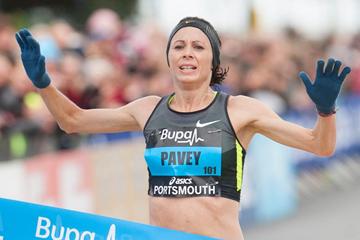 After storming to victory in the 10,000m at the European Championships, Jo Pavey has confirmed that she will return to Portsmouth on 26 October to contest for a hat-trick at the Bupa Great South Run, an IAAF Gold Label Road Race.

The 40-year-old, who also won 5000m bronze at the Commonwealth Games, will be aiming for a place in the record books when she bids to become the first woman to win the race three times.

Pavey prevailed in 2006 and 2012. Another success in 2014 would take the mother-of-two ahead of Derartu Tulu, Sonia O’Sullivan, Liz McColgan, Restituta Joseph and Iulia Negura – all two-time winners – in the Bupa Great South roll of honour.

“The Bupa Great South Run means a lot to me,” said Pavey, who will join 25,000 runners at the event, which celebrates its 25th staging this year.

“It just really suits me. I love the fact that it’s 10 miles, and the course is fast and flat, and it’s always a really competitive race. I love the atmosphere and finishing along the seafront in Portsmouth.

“I’ve had a great year and I’m excited to be going back to Portsmouth.  It would be nice to try to get a personal best this time,” said Pavey, whose PB of 52:46 was set when winning in Portsmouth eight years ago. “Even though I’m getting older, I still feel determined to try to run fast times.

“It’s quite exciting in a way, because I still have to be competitive with the younger girls but there’s the added dimension of a bit of fun and banter being added in there because people notice that you’re 40.

“I think it just shows that you can keep going on longer. I think in the past people mistakenly thought you had to retire younger; they probably thought it was the done thing.

“I’m a busy mum but I’m very fortunate that I’m in the position where my husband and I both work at the running together. We’re both based at home with the kids. It works for us as a family.”