Athletics South Africa has selected a team of 30 athletes to participate at the IAAF World Championships in Moscow from 10-18 August 2013.

Lynique Prinsloo, ranked 10th in the world in the women’s Long Jump, will make her debut at the World Championships.

As has become customary, a full complement of men’s 400m Hurdlers have met the ‘A’ standard, with 2011 finalists LJ van Zyl and Cornel Fredericks being joined by PC Benecke. In the women’s400m Hurdles, Anneri Ebersohn was chosen over club-mate Wenda Nel Theron as Ebersohn is the national Champion. Both had achieved the ‘B’ standard, so only one could be selected.

It was the same case in the men’s Shot Put, where Orazio Cremona is chosen over Jaco Engelbrecht, as the selectors went with the national champion.

Sprint sensation and double World Student Games gold medallist Anaso Jobodwana has been included in the 100m and 200m. He is likely to be joined by the exciting new talent, Akani Simbine, who set a national junior 100m record in December last year.

Unfortunately, African 100m champion Simon Magakwe was not available for selection due to injury. Simbine will be confirmed in the team provided no other athlete achieves a faster ‘B’ standard before 28 July.

Andre Olivier, who has been showing great form in the IAAF Diamond League meetings this season, will line up in the 800m.

The team also includes national record-holders Johan Cronje in the 1500m, Willem Coertzen in the Decathlon, Lehann Fourie in the 110m Hurdles, Chris Harmse in the Hammer and Sunette Viljoen in the Javelin.

World Student Games gold medallist Stephen Mokoka has achieved the ‘B’ standard in the 10,000m, joining Elroy Gelant (5000m), Robert Oosthuizen (Javelin) and Justine Palframan (200m) as athletes who will be added to the final team provided no-one achieves a better ‘B’ standard than them.

The marathon team is a mix of experience and youth, with national champion Cornelia Joubert joining Olympians Irvette van Zyl and Tanith Maxwell on the women’s team. Van Zyl joins her husband, LJ, in the team.

The men’s team includes former New York Marathon winner and multiple national record-holder Hendrick Ramaala. With Mokoka deciding to concentrate on the 10,000m, Ramaala is the second-fastest during the qualifying period. He is joined by Lusapho April and Sibusiso Nzima.

The final team will be confirmed on 29 July, giving athletes who have not yet qualified a last opportunity to do so.

Athletics South Africa for the IAAF

*To be confirmed on 29 July, once qualification period ends 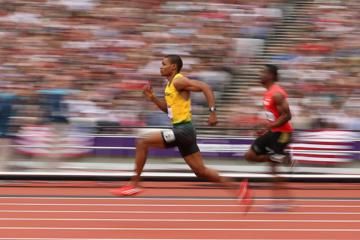 Jobodwana sizzles to sprint double at World U...