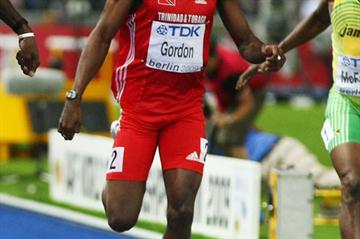 Santo Domingo, Dominican RepublicJehue Gordon of Trinidad & Tobago confirmed himself as one of the region’s top bets for upcoming IAAF World Junior Championships in Moncton, Canada (19 – 25 July), while the Jamaican 4x400m girls produced a world leading time in the 4x400m relay to cement Jamaica’s dominance at the 18th Central American and Caribbean Track and Field Championships, held over the weekend (July 2-4) at the Felix Sanchez Olympic Stadium in Santo Domingo.

A total of 532 athletes from 27 nations took part in the U-17 and U-20 categories. In the latter, they geared up for the World Juniors, while the youngest athletes are preparing for the inaugural Youth Olympic Games, to be held in Singapore August 14-26.

Gordon, billed as the top star of the event, sealed a comfortable victory in the 400m Hurdles with a new championship record 50.26sec, over a half a second faster that Cuba’s 1986 World junior champion Emilio Valle’s 50.66, set in 2006. The fourth place finisher at the 2009 World Championships in Berlin, is looking forward to giving Trinidad and Tobago its first World junior title since 2006. He ran the semi-finals in 2008.

Trinidad and Tobago also displayed a solid performance. Their 4x100m squad ran a championship record of 39.77 secs to erase the 39.84 set by Jamaica in 1998.

Two-time 2009 World Youth Championships silver medallist Allison Peter, who will turn 18 next week, dominated her main event the 200m in 23.32, running in a -1.3 head wind.

Sixteen-year old Catherine Nina pleased the home crowd with a championship record in the girls High Jump of 1.81m. Runner-up Akela Jones, 15, cleared the same height for second. She had jumped 1.85 at the Carifta Games in April.

Bahamas’ Shaynae Miller erased an eight-year old championship record in the 400m with her 53.39 clocking. She is also qualified for the Youth Olympic Games in Singapore.

The highlights in the field were the new records by Jamaica’s Chad Wright (18.32m in the Shot Put) and Quincy Wilson of Trinidad and Tobago in the Discus Throw (62.93), ahead of Jamaican Chad Wright (60.52m).

Held every two years since 1974, the Central American and Caribbean Championships have seen the emergence of many of region’s stars, including Veronica Campbell-Brown. Over 100 of them have gone up to win World and Olympic medals.

The next edition will be held in El Salvador in 2012.