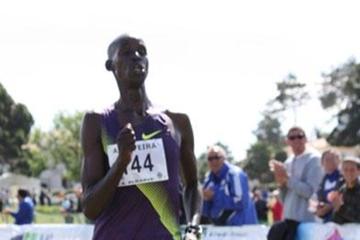 A strong women’s field resulted in a great race, despite the absence of pre-race favourite Eunice Jepkorir of Kenya. Running from the front throughout, Hungary’s versatile Kalovics illustrated solid form to win in 19:38.05, ahead of Ireland’s Fionnuala Britton, who was 4th at December’s European Cross Country Championship. The last podium spot went to local girl Ana Dias, the recent bronze medalist at the Portuguese Cross Country championships, finishing 13 seconds ahead of Anália Rosa, a former national Cross Country champion in both long and short races and the recent bronze medalist in the national road championship. They were the only two Portuguese to finish among the top eight.

2008 Olympic 3000m Steeplechase champion Gulnara Samitova – Galkina from Russia was the last women under 21 minutes over this six kilometre course.

The men’s race was not so competitive as the women’s. Josphat Kiprono Menjo was clearly on another level and only had to produce a controlled race to win here for third time after victories in 2008 and 2009. Menjo crossed the finish line 10 seconds ahead of the first of the Portuguese runners, Manuel Damião, who was fifth at the national Cross Country championship. His teammate on Conforlimpa, the European and national Cross Country team champion, Licínio Pimentel finished third place ahead of Portuguese 2011 national Cross Country bronze medallist Marco Morgado.