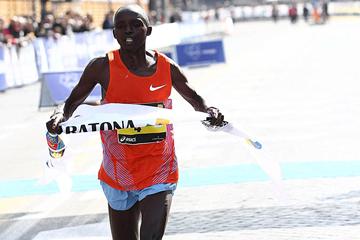 Luka Kanda took the honours at the 18th edition of the Rome Marathon on Sunday (18) in 2:08:04 while pre-race favourite Hellen Kimutai fulfilled the pre-race prediction by winning the women’s race in 2:31:11.

The men’s race was on course record pace until the 30 km – roughly 3:00 per kilometre – but then the pace inevitably slowed in the final seven kilometres, also due to the strong win. Kanda nonetheless improved his previous PB of 2:08:40 set in Cannes.

The Rome Marathon is an IAAF Gold Label Road Race.

After pacemaker John Kipkorir dropped out at 30 km, the race really reached its climax when Kanda and Samson Barmao unleashed their decisive attack breaking away from the rest of the field. Kanda pulled away from Barmao at 32 km and increased his lead to 19 seconds at 35 km which he passed in 1:44:52 (with a 5 km split between 29 and 34 km in 14:51). However the pace slowed down after 35 km.

The fast pace, rising temperatures and windy conditions took their toll in the final 7 km when Kanda ran unchallenged in the lead but at a considerably slower pace (3:16 at 39 km and 3:11 at 40). He passed the 40 km in 2:00:54. His win was not under threat but any hopes to break the course record faded away with the worldwide famous Colisseum Theatre on the horizon. Kanda managed to dip under his previous lifetime best from 2:08:40 set in Cannes 2011 to 2:08:04, the third fastest time ever run in Rome. Barmao, who entered the Rome Marathon with a 2:08:56 PB set in Cologne in 2011, also set his PB with 2:08:52 for second place. Ethiopian Abebe Tsega finished third in 2:10:47.

Kanda hails from a large family with ten children. He lives in Iten near 2009 winner Benjamin Kiptoo. “When the pacemakers dropped out, I made my attempt and my tactic paid off, although wind, warm temperatures and cobblestones caused me some problems at the end of the race. I had never been in Rome before but I live not far from three runners who won this race in the past and told me about the good quality of this race. I will invest the 40,000 Euros in buying land to build houses,” Kanda said.

Barmao said about his second place: “I tried to follow Kanda for three kilometres but when he launched his kick I could not follow him.”

The women’s race set off at a 2:26 pace. In the early stages Kenyan Hellen Kimutai, entered with fastest time of 2:25:52, was 25 seconds behind the leading group led by Ethiopians Bizunesh Urgesa, Shuru Dulume Diriba, Gulume Chasa Tollesa, Reda Ehitu Kiros, Ayantu Hailemaryam, Gadise Fita Megersa, Makida Abdela and Ashete Bekele who went through the 5 km mark in 16:52. Kimutai gradually closed the gap and was eight seconds behind the leading pack at 10 km (34:37 to 34:45).

Kimutai managed to catch up with the leading Ethiopians at 15 km mark which was passed in 52:27.

Bekele was 16 seconds ahead of Kimutai at 40 km but faded dramatically in the final kilometre and was overhauled by experienced Kimutai who was still fresh and romped home in first place in 2:31:11. It was Kimutai’s fifth marathon win in 24 races. Kimutai, mother of four children, already ran in Rome finishing third in 2000 and second in 2007. Bekele finished runner-up in 2.31:23 ahead of Russian Marina Kovalyova (2:31:53).

“At the beginning of the race my rivals started too fast and I decided to run my own race. After catching them, I decided to remain behind but in the final stages I managed to overhaul Bekele and win the race. I will invest the money won today for my children: Sharon 12 years old, Isaac 10 years old and twin children Martha and Mark eight years old. I thank my husband Kenneth Kibet, who coaches me and helps me combine my career with motherhood,” said Kimutai.

No less than 12,688 runners crossed the finish-line in Via dei Fori Imperiali breaking the all-time record for the Rome Acea Marathon. Rome set the record as the most participated marathon event in history in Italy.

Leading results from the Rome Marathon: