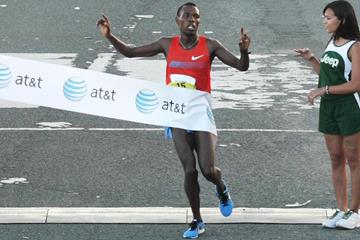 Karoki to chase world record at Copenhagen Half Marathon

Organisers of the Copenhagen Half Marathon, an IAAF Bronze Label Road Race, have announced that Kenya’s Bedan Karoki will take a tilt at the world half marathon record at their race on Sunday 13 September.

Karoki – who is also an accomplished runner on the track with a 10,000m best of 26:52.36 – will be racing in the city and on the course which staged last year’s IAAF World Half Marathon Championships, won by Karoki’s compatriot and rival Geoffrey Kamworor.

Kamworor won on that occasion in 59:08, proving that Copenhagen is a quick course, while Karoki’s personal best is 59:23 from when he won the 2014 Philadelphia Half Marathon. The pair also finished first and second respectively at the 2015 IAAF World Cross Country Championships in March.

The world record has stood at 58:23 to Eritrea’s Zersenay Tadese, which he ran at the 2010 Lisbon Half Marathon.

"This year’s Copenhagen Half Marathon route differs slightly from the one used for the World Half Marathon Championships and is even faster," said Jakob Larsen, director of the Danish Athletics Federation. "I have no doubt that there can be a world record on it, if weather conditions are good on 13 September.

"When it comes to beating a world record, there must be some pacemakers that Karoki should try to follow and we will also be bringing in hares of the highest international level,” he added.

The organisers expect an estimated 25,000 runners to participate in the race.