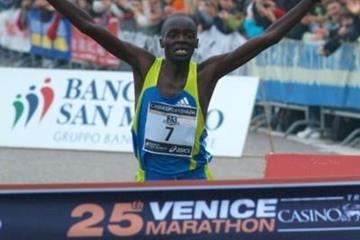 Kenyan Simon Mukun won the first major marathon of his career at the 25th edition of the Venice Marathon today (24).

Mukun beat Ethiopian Sahle Betona Warga after a dramatic fight in the final km run over the famous bridges. Makun, who entered the Venice Marathon with a previous PB of 2:11:39 set at altitude in Nairobi, dipped under the 2:10 barrier for the first time in his career with 2:09:35 beating Betona by 12 seconds. The Ethiopian also improved his PB from 2:12:13 set in Paris last April to 2:09:47. Peter Nderitu from Kenya finished third in 2:10:52.

The Venice Marathon is an IAAF Silver Label Road Race.

Pacemakers Mubarak Hassan Shami from Qatar, past winner in Venice in 2005 and World silver medallist in Osaka 2007, and Paul Kimugul of Kenya set a fast pace in the early stages of the race going through the 10 km mark in 30:04 and 15 km in 45:33. The leading pack featured these two leaders and Kenya’s Paul Samoei Kimeli, Philemon Kemboi Kiprono, Peter Nderitu, Peter Some Kimeli, Simon Mukun and Ethiopians Tuyuba Beju, Sahle Betona Warga and Haile Diriba Demisse.

Behind the leading group Migidio Bourifa and Danilo Goffi engaged their fight for the Italian Marathon title.

The leading group began to break up at 21 km when Kimugul and Shami still kept a fast pace of 1:03:37 which indicated a possible attack on the course record (2:08:13 set last year by John Komen). Seven men remained in contention in the second half of the race. They still kept a 2:07 pace but the race became more tactical in the second part which is traditionally more challenging.

Six men remained in the lead at the 30 km when they crossed the San Giuliano’s Park, a vast green area in Mestre. Shami finished his pacemaking task after reaching the 30 km mark in 1:30:54. Danilo Goffi was forced  to drop out at 33 km leaving Italian Migidio Bourifa alone in contention for the Italian title.

On the long Freedom’s Bridge which links Mestre to Venice the fight for the final win really hotted up. A trio formed by Betona, Mukun and Nderitu broke away from the rest of the group.

At 40 km Makun and Betona remained alone and began their fight for the win over the 13 bridges. Betona was in the lead over the penultimate bridge and seemed to be the favourite to take the first place thanks to his best speed but tragedy struck him when he fell with 400 metres to go. Makun took advantage of his rival’s fall to take the win in 2:09:35.

“I knew that I could  win the race even without Betona’s fall ”, said Makun, a 25-year-old runner who comes from the same village as former Marathon world record holder Tegla Loroupe.

Migidio Bourifa, seventh at the European Championships in Barcelona, crossed the finish-line in 2:15:18 taking his third Italian Marathon title after Rome 2007 and Treviso 2009.

The race set off at a fast pace. A leading group formed by Kenyans Lydia Cheromei, Elizabeth Chemweno and Ethiopians Shuru Dulume Diriba and Makda Harun Haji reached the 5 km in 17:20 and the 10 km in 35:13. They reached halfway in 1:12:56 at a course record pace. A possible attack to the 2:26 barrier was still within the reach at this point of the race.

Cheromei was still in the lead passing the 30 km in 1:43:47 inside the St. Giuliano’s Park with a gap of two seconds over Chemweno, Dulume, Haji and Berwerwe. Russian Elena Ruhliada followed in seventh place in 1:46:27.

Three women remained in contention on the Freedom’s Bridge where Haji and Chemweno broke away . At 40 km Haji launched her attack taking a lead of 1:13 over Chemweno when they reached Venice.  In the wake Ruhliada began catching up on Elisabeth Chemweno and took third place.

For Haij it was the second marathon this year after a second place in 2:30:44 in Daegu, the venue of 2011 IAAF World Championships. “Yesterday I told at the press conference that I wanted to run fast and I fulfilled my promise. I expected to finish in the top three and to dip under 2:30,” said Haji.