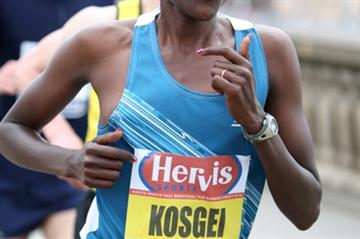 Only a chill wind on the Vltava River prevented Joel Kemboi clocking a superlative time in the Hervis Prague Half Marathon today (27), nevertheless the young Kenyan won in 60:09, just two seconds outside the course record set by his colleague Nicholas Koech last year.

A better measure of Kemboi’s excellence is that he beat pre-race favourite, another colleague Wilson Chebet by over a minute, and Chebet has broken the one hour mark four times in the last two years. Today he could do no better than 61:26 for second place.

“I knew I had a good chance to win,” said Kemboi immediately after the victory. “My training has been going so well, the only person I was afraid of was Chebet, but when I went ahead before 10k, he did not come with me.”

With the leaders aiming for a sub-one hour time, no one expected a break so early in the race, but the 22 year old Kemboi kept forging further ahead, and managed to stay on even-time until 18k, and the final stretch into a headwind downriver. “The last 5k was so windy, and it really slowed me down. Without it, I think I would have broken the record.”

Chebet ran with compatriot Joseph Maregu and Ethiopian marathoner, Yemane Tsegay until well past 15km, when he took off the finish second, while Tsegay, fourth in the World Championships marathon in Berlin last summer got the better of Maregu in the sprint, the Ethiopian clocking 61:37, one second ahead of Maregu. Tsegay, who won the Lake Biwa (Japan) marathon last month should have more success when he comes back to Prague on May 9, to run the full marathon.

With a 61:00 half marathon in Italy a year ago, Kemboi was easily the slowest of the contenders coming into the race, but having won the Discovery Kenya cross country in Eldoret last month - an event which always throws up major talent – an upset was always on the cards.

So it proved. Zane Branson, an athlete manager who was following the race on a bike said, “that wind was really strong, but he never gave up. If it hadn’t been so windy, he’d have been close to 59 minutes.”

Kemboi, who says he will not move up to the marathon for at least two years, concurred. “I’ll talk to my manager tomorrow and ask him to find me another race in the next month or so. I think I can do something like 59:20, or below.” And that would really put him in the world’s elite.

The women’s race was a successful defence for Rose Kosgei, whose time of 69:57 again showed the strength of the wind, since she won last year in 69:03. Kosgei too showed her hand early, taking the lead around 10km, and beating two of her colleagues, Florence Jepkosgei and Monica Wangari by half a minute. Jepkosgei clocked 70.28 for second, with Wangari five seconds behind.

The mayor of Prague, Pavel Bem got the better of soccer superstar (retired) Pavel Nedved. The mayor, who is a renowned mountaineer, ran 1:36:52, while Nedved clocked 1:49:44.