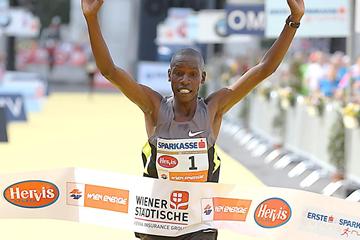 Confidence is a mandatory trait for a marathon runner and Kenya’s Henry Sugut approaches the 2013 Scotiabank Toronto Waterfront Marathon on 20 October with an abundance of it.

“As always, when I am going for a race, I target my personal best,” said Sugut ahead of the IAAF Silver Label Road Race. “In this case, if I happen to break my personal best, then I will have broken the course record.”

The 28-year-old Kenyan has his sights on winning in Toronto and challenging the 2:07:58 course record set by his countryman, Kenneth Mungara, in 2010. These are not the idle thoughts of a dreamer; Sugut is a truly world-class performer.

A year ago he took forty seconds off the Vienna Marathon course record with a personal best of 2:06:58. What bears noting is that the record he smashed had belonged to his countryman Abel Kirui, the two-time World Champion and 2012 Olympic silver medallist. It’s no wonder, then, that his performance in the Austrian capital caught peoples’ attention.

He further endeared himself to the event earlier this year when he won there for the third consecutive time. Now he turns his attention to what will be his first trip to North America.

“I have not heard so much about Toronto,” Sugut admits, “that's why I want to come and participate.”

“The training is going well. I am so happy how the body is responding. I have been doing long runs and, on the routes we have been going, I see a lot of improvement as far as time is concerned. My fitness level, I can compare as almost the same as when I was running last year. For sure, it is good shape.”

Sugut is managed by the Netherlands-based Global Sports Communication who also oversees the careers of Ethiopian superstars Haile Gebrselassie and Kenenisa Bekele, and he trains in Kaptagat with the Global training group. His training partners for the past decade have included the reigning Olympic and World Marathon champion, Stephen Kiprotich of Uganda, and Eliud Kipchoge, the fourth-fastest marathon runner of all time.

A newcomer to the training group is Sugut’s younger brother Dominic of whom he predicts great things. According to Global Sports, Henry has told the coaches his brother just needs another year of training before he is ready to compete with the best runners in the world.

Sugut took up running in school and eventually had a lot of success on the track, recording personal bests of 13:08.90 and 27:51.34 in the 5000m and 10,000m. But, in an era where Kipchoge and others were running well under 13 minutes for the shorter distance, he knew he would have to try his luck on the roads.

And so he and his peculiar running style – he is the one with his head cocked to the side – was easily convinced to try the Marathon.

Married with two young children, Sugut runs to earn money for his family and to build a better life than he had as a child.

“I grew up in Nakuru district, Rongai division, in a village called Visoi,” he says. “For now I have not decided what I will do after I finish running but farming is the one thing in my mind.

“Normally I take some rest after a competition. During this time, I will concentrate on construction, like building rental houses because I have some plots of land that I have bought and they need to be developed. For now I don't have any other business. I am only concentrating on my running.”

As for the Scotiabank Toronto Waterfront Marathon, he is anxiously awaiting the start and a shot at the winner’s prize of $20,000 and the course record bonus of $35,000. In a country where an acre of land sells for about $5000, the money would certainly come in useful.

The Kenyan contingent will journey from their training base near Eldoret to Nairobi then fly to Amsterdam before boarding a plane to Toronto. Like most of his peers, he is encouraged by the fact that Toronto race director Alan Brookes is supplying pacemakers who will take aim at the course record.

“I would like to have pacemakers, they do a lot of good work by pushing us and attaining good times,” he declares. “Like (last weekend) in Berlin they contributed a lot for the breaking of the World record.”

Sugut knows he will have his hands full with the Toronto field which includes defending Toronto champion Sahle Warga of Ethiopia, his countryman Deressa Chimsa and Morocco’s Abderrahmine Bouramdane. But Sugut has proven himself time and time again as a serious contender wherever he races. Toronto running fans are, indeed, in for a treat.