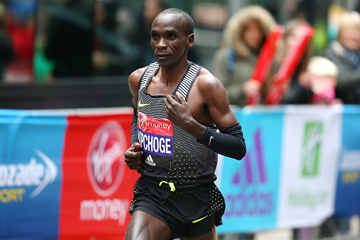 Kipchoge confirmed for Delhi Half Marathon

Kenya’s Olympic marathon champion Eliud Kipchoge will have his first race since his memorable triumph in Rio at the Airtel Delhi Half Marathon, an IAAF Bronze Label Road Race, on Sunday 20 November.

Kipchoge, who turns 32 on 5 November, has put together a winning streak of seven successive marathons and is unbeaten over the classic distance in the past three years.

However, the Airtel Delhi Half Marathon will be his first outing over a shorter distance since he finished sixth at the Ras Al Khaimah Half Marathon in February 2015.

"It’s six years down the line since the Commonwealth Games were held in Delhi, where I got the silver medal in the 5000m," Kipchoge said. "I have great memories of my last visit to India and now I am ready to come back in a different capacity as a road racer.

"India is one of the world’s biggest hubs of technology and business but I am looking forward to visiting the country and once again experiencing competitive sport in India," he added.

Kipchoge has a half marathon personal best of 59:25, which dates from 2012. Although he has not broken 60 minutes for the half marathon since then, he will still have in his sights the course record of 59:06 set by Ethiopia’s Guye Adola in 2014, which makes the race one of the fastest half marathons in the world.

"We are excited and privileged that the Airtel Delhi Half Marathon will host the Rio Olympic gold medallist Eliud Kipchoge as part of the elite field for the 12th edition of the event," said Vivek Singh, joint managing director of race promotors Procam International. "Eliud's presence will certainly provide a further fillip to one of the world's most prestigious half marathons."