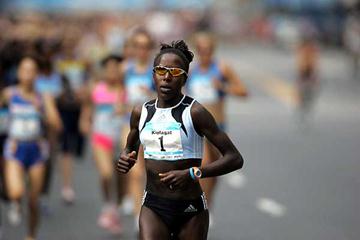 Kiplagat is determined to win that elusive medal in Edmonton

Boulder, Colorado, USASitting at a table outside the Trident Café, sipping a cup of steaming tea – extra hot, lots of milk – Lornah Kiplagat looks like any of the hundreds of lean and athletic climbers, triathletes and runners who make this college town home.

It is a pleasant late-summer evening, and Kiplagat is relaxed and joking with her husband, Pieter, along with some of the locals who hang out at the sidewalk café. The normally affable Kiplagat, however, turns serious and her twinkling eyes harden when talk turns to the 14th IAAF World Half Marathon Championships set for next Saturday 1 October in Edmonton, Canada.

“Absolutely I am going there to win,” says Kiplagat, a native of Kenya and now a Dutch citizen. “I am not traveling there to lose. Edmonton is important for me, especially because it is the final one (half marathon championships). I am  healthy, training is going well, and I am ready to really push it. I am confident that I can win.”

After showing great form on the roads in early 2004, taking a famous win over World marathon record holder Paula Radcliffe in San Juan, Puerto Rico, at the World’s Best 10K in February, and then running world’s fastest ever over 5km the following month, her good form as continued in 2005 on the roads in the USA with wins at the Peachtree, Falmouth and Beach to Beacon.

“It has been a good year so far,” says Kiplagat, who surprised some of the elite men at Peachtree by running alongside them for a first mile of 4:48. “Some of the training has been tough here, but I am feeling good. Edmonton fits in well for my preparations for New York (6 Nov). Five weeks is plenty of time in between.”

Kiplagat’s training in Boulder has included 40km runs on Magnolia Road, a rolling dirt road at nearly 2700 meters in the mountains west of town, and track sessions of 30x400m.

“We went to the track this week to get some speed in my legs before Edmonton,” she says. “I have also been getting treatment from (1993 World Marathon champ) Mark Plaatjes, massages from his wife (Shirley), aqua jogging in the pool, and taking saunas.”

But talking with her at the café on this summer evening, it is clear that Kiplagat is not satisfied. She dismisses her past wins and records with a wave of her hand, pointing out that she was fourth in the 10,000m at the 2003 Paris World Championships and fifth in the 2004 Athens Olympic 10,000. In both races she was out-kicked in the final 200m.

Kiplagat eschewed racing for all of September in order to finally earn the elusive medal that she has come so close to getting. It will not be easy. The Ethiopians will be in Edmonton on Saturday, along with Romanian Constantina Dita and some of the world’s other top runners. However, the deep and fast field does not concern Kiplagat.

“I do not care who is running,” she says, finishing her cup of chai and standing up to show that the conversation is over. “I could not even tell you who will be there. All I know is that I am going to win. The time does not matter; only winning does.”

Michael Sandrock for the IAAF