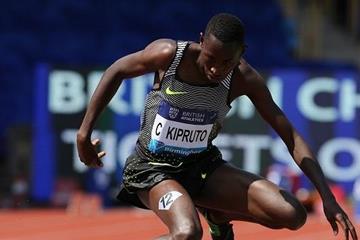 Conseslus Kipruto has already proved the man to beat in the men’s 3000m steeplechase, having recorded victories at the IAAF Diamond League meetings in Doha, Rabat and Rome. The world-leading personal best of 8:00.12 he produced in Birmingham on Sunday (5), however, was on another level.

In an impressive display of front running, the 2013 and 2015 world silver medallist went out at world record pace, clocking 2:35.27 at 1000m and leaving the rest of the field well in his wake.

Clearly tiring over the penultimate lap despite putting more distance between himself and the rest of the field, he picked himself up from the bell to revive the possibilty that he might be the 12th man in history to go under eight minutes but it was not to be.

Nevertheless, his winning time of 8:00.12 was the fastest ever steeplechase performance on British soil.

He initially looked slightly disappointed as he finished just outside the eight-minute barrier, before a rueful grin crossed the face of the former world youth and junior steeplehase champion.

“It was a very good time but I was not expecting to run that time in Birmingham," he said. "(The) last two weeks, I have earned a hat-trick of Diamond League points, today I wanted it to be my fourth consecutive win.”

In the 1500m, Asbel Kiprop had promised a fast race and he delivered.

When he crossed the line in 3:29.33, a wide smile came across Kiprop’s face as he bettered his own world-leading mark from the opening IAAF Diamond League meeting in Doha a month ago by almost three seconds.

“This is the time when you need to do this and deliver the results, in front of the fans,” said Kiprop, whose winning time was also a British all-comers' record.

“Getting the Diamond Race points are important as well. It helps in training as well and makes you confident ahead of the championships.”

Burundi’s Francine Niyonsaba didn’t need Diamond Race leader Caster Semenya in the race to challenge the South African’s world lead. The world indoor champion improved her season’s best in impressive fashion to 1:56.94 to record yet another meeting record just minutes after Kipruto and Kiprop had clocked their marks.

France’s Renelle Lamote came through strongly over the final 50 metres to finish second with a lifetime best 1:58.01. Canada’s world silver medallist Melissa Bishop was third in 1:58.48.

In a tactical women's 5000m, world 10,000m champion Vivian Cheruiyot out-kicked fellow Kenyan Mercy Cherono in the final 30 metres to win by just 0.06 in 15:12.79 and acquire her first victory of year on the track.