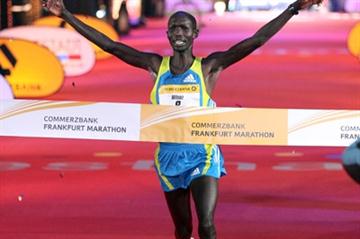 Kipsang, Kirwa and Cheruiyot return to Frankfurt for 30th edition of marathon

Frankfurt, GermanyIn the past three years the BMW Frankfurt Marathon have celebrated three great champions from Kenya, Wilson Kipsang, Gilbert Kirwa, Robert Kiprono Cheruiyot, each of the them improving the course record by a considerable margin. Now this trio of record breakers will come back for the 30th edition of the race on 30 October.

Despite Kipsang’s outstanding time of 2:04:57 from last year they will target yet another course record and as such a thrilling men’s race can be expected at the jubilee edition of the Frankfurt race, which is an IAAF Gold Label Race. A record entry of around 14,000 runners is expected.

While Gilbert Kirwa and Wilson Kipsang had been announced earlier by the organisers, Robert Kiprono Cheruiyot is a new addition to the field. Three years ago the Kenyan caused a major shock among the established international runners of the Frankfurt Marathon. Competing outside Kenya for the first time Cheruiyot left behind the favourites and stormed to a 2:07:21 victory. It had been a sensational marathon debut for the 20 year-old.

A year later he returned to Frankfurt, finishing second behind Gilbert Kirwa, who improved the course record to 2:06:14. Cheruiyot was just nine seconds behind. He then went on to achieve his biggest success so far. In 2010 the Kenyan took the prestigious Boston Marathon, improving the course record to an amazing time of 2:05:52. This still is the personal best of the 23 year-old. Taking into account that Boston is not an easy course due to the hills it should be possible for Cheruiyot to further improve – especially on a fast course like Frankfurt.

With the current course record of 2:04:57 a target even Haile Gebrselassie’s World record of 2:03:59 might be within reach. And there will be quite some opposition for Kipsang, Kirwa and Cheruiyot. Kenya’s three time winner Wilfred Kigen (2005 to 2007), who had established Frankfurt’s first sub 2:08 time with 2:07:58 in 2007, will also return. But it is probably an Ethiopian, who could cause an upset. Deriba Merga is well known for taking the offensive in races and always chasing fast times. The Boston Marathon winner from 2009 so far has a personal best of 2:06:36. The Ethiopian was fourth in the Olympic Marathon in Beijing in 2008.