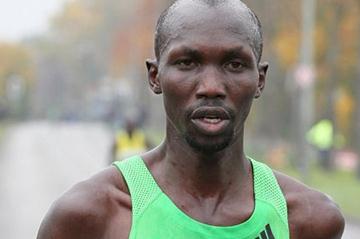 Wilson Kipsang’s 2:03:42 in the BMW Frankfurt Marathon on Sunday (30), an IAAF Gold Label Road Race, is up there alongside Patrick Makau’s 2:03:38 World record from Berlin last month; Geoffrey Mutai and Moses Mosop ran 2:03:02 and 2:03:06 respectively, admittedly with a hurricane behind them on a slightly downhill course in Boston in April; and Abel Kirui established his credentials for pre-selection for London 2012, by successfully defending his World title in Korea two months ago. And that’s without the much-missed, mercurial Sammy Wanjiru, who became the first Kenyan to win the Olympic marathon gold in Beijing.

And the problem is... only three per country can run in the Olympic Games.

Nice problem to have, most countries’ selectors might say. But that 'problem' could yet get worse. It just so happens that on hand in Frankfurt this weekend was Peter Angwenyi, the public relations officer for Athletics Kenya. Angwenyi told us that the selection of the Olympic Marathon trio would not be made until after the London Marathon next April, the final one of the big spring Marathons, which also include Paris, Rotterdam and Boston. So, who knows? Given the burgeoning talent coming out of Kenya, ready to burn the tarmac off the road surfaces of the world’s Marathon courses, there could well be another half dozen guys claiming World record credentials, and clamouring for a place in that golden trio.

But, for the time being, let’s concentrate on the man of the moment – Wilson Kipsang. Unknown to the wider world of marathoning before he came to Frankfurt last year, Kipsang, now 29, had nonetheless made an impressive debut in Paris earlier in 2010, finishing third in 2:07:10. That did not surprise his manager, Gerard van de Veen, who in a relatively brief acquaintance, had become inured to Kipsang’s capacity to shock.

“I got an email from one of my runners in Kenya saying he had a strong new guy, and could I take him on. I didn’t have space, so I said no. I’d organised races in Europe for three young guys, and at the last minute one of them got injured, so I said to Wilson, here is your chance. The first race was a 10 miles in Germany, and he won and broke the record which had stood for ten years.

Kipsang’s second Marathon was in Frankfurt a year ago, when he announced the seriousness of his intent, with a win in 2:04:57, third best of the year, and then the eighth fastest in history. His third Marathon, in March this year, may not have been as fast, but more impressive was the way he disposed of Deriba Merga, who had finished fourth in the Olympic Marathon in Beijing. The two were together in the lead at 38k, then Kipsang took off, and put exactly three minutes between himself and Merga in the last four kilometres, winning in 2:06:13.

Now, but for a pre-race shower of rain, which made the Frankfurt course, on his own admission, “a little bit slippery”, Kipsang might be the World record holder. He was certainly confident enough before the race to predict that a World record was a real possibility. And afterwards?

“I prepared really well, I knew I’d be somewhere close to the World record. I was fairly confident, I knew I could beat the other guys, and when we really started to race, I had a feeling I’d either break the World record, or be very close."

“The surface was a little bit wet, so it cost us something. There was less friction, so you expend more energy. I saw we were a little slow at 35k, and I felt strong, so I decided to go for it. But I’m pretty happy, it’s my personal best.”

It’s still a long way to that Olympic Marathon, over nine months, but Kipsang seems as confident of selection as he is of his talent. “Based on today’s performance, I think I will be selected, and I would really love to be selected. That sort of competition, guys from all over the world. I deserve to be there. When there’s no pacemakers, it’s different, it’ll be a tactical race, but I’ll prepare. I have to run one more Marathon, maybe in the spring, because the Olympic Marathon is a long way off.”

Kipsang and his wife, on her first trip outside Kenya, cut a very happy couple in the athletes’ hotel after the race, the more so perhaps since Doreen has become so involved in her husband’s success that she has begun serious training herself. Coached inevitably by hubby. “She’s doing very well,” says Kipsang proudly. And Doreen is smart enough to say, “It will be at least two years before I run a marathon.” Which would be good advice to your next door neighbour when (s)he proposes jumping on the fun-running bandwagon, and decides to ‘run’ a Marathon off the back of two months’ jogging.

But, of course, people like Kipsang, Makau, Kirui, Mutai and Mosop, and dozens, if not hundreds of others in Kenya are as far away from joggers as it is possible to get. And though they might benefit from being born, nurtured and trained at altitude, they still have to start at the bottom.

“When I first started running,” says Kipsang, “I didn’t know if I could make it, I was just hoping I could reach what guys like (Paul) Tergat were doing. So I tried to work hard, and I could see it was coming.”

And now it’s arrived, in spades. And Kipsang, like Makau, is in the driving seat of a latter-day juggernaut, which is crushing the rest of the distance running world like a heavy steamroller. Make that a fast, heavy steamroller.