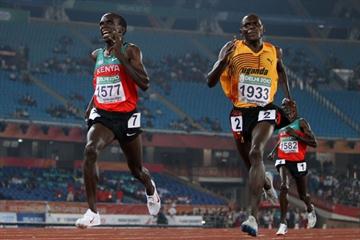 The most relevant action in the Jawaharlal Nehru stadium was the 24-hour recovery operation which, in the wake of the 19th Commonwealth Games Opening Ceremony, turned it from a building site into an athletics arena.

The battered infield was re-turfed, the track was partially re-laid. The result, as the Commonwealth Games chairman Mike Fennell had insisted earlier in the day, was that athletics was “all systems go.”

Strictly speaking, that was not correct, given further problems with the Info system. But all events went ahead as scheduled; the organisers did not have to re-schedule the flagship sport of the Games, and the stadium, while far from full to its 60,000 capacity, contained clusters rather than dots of people – clusters who generated a good atmosphere on an evening of steamy heat.

There was only one mainstream athletics final on offer for day one of track and field – but it was a memorable one.

The men’s 5000 metres contained a field peopled with several world class runners, not least Kenya’s Eliud Kipchoge, whose finest hour – so far – came at the 2003 IAAF World Championships where he held off the challenge of multiple world record holder Hicham El-Guerrouj to win the 5000m title by a margin of four hundredths of a second.

Kipchoge, whose winning time of 12:51.21 at the opening Samsung Diamond League meeting remains the fastest run this season, was involved in another grandstand finish here, with victory being decided by seven hundredths of a second.

And it went not to him, but to Uganda’s Moses Kipsoro, after a thrilling, full pelt challenge set in train by the bell for the last lap. As the runners crossed the line, Kipsoro’s face was set in determination, but Kipchoge, fiery eyed and teeth bared with effort, looked almost baffled that his earlier surge and his concerted effort all the way round the final bend and down the home straight had not succeeded.

Kipsoro, in the orange vest of his nation, waved in triumph after earning his first major title in a tactical race where his winning time was 13:31.25.

A trio of Kenyans had chased the Ugandan home – Kipsegechi Yator was fourth in 13:37.02, with England’s European silver medallist, Chris Thompson, holding off the challenge of the towering Australian, Collis Birmingham, to take fifth place in 13:39.28.

With a season’s best of 13:00.15, set in coming third at the Rome Diamond League, Kipsoro – a 25-year-old who finished fourth in the last World Championship and Olympic finals – was clearly a strong contender for the title.

“I had my plans but they did not all work out,” he said. “I knew that my opponents had planned for the race, but you know there is something called luck. I think it was my luck today. It was a close finish. I had to fight all the way to the line.

“I knew Eliud was also good at finishing, so I fought to the end, and thank God I came first.”

Kipchoge commented: “It is the first time I have come to the Commonwealth Games. I thought I could get past Moses, but I couldn’t. It’s fine. It was a tough race, but I am happy with it.”

Kiptoo added: “This competition was between me, Moses, Eliud and our fellow Kenyan Kipsegechi. I am happy to accept the result – I know that it’s not the end of everything.

“There is the World Championship next year and I hope I am going to challenge my colleague again if I am selected.”

Kiptoo had been among the group of seven who had broken clear over the final 1600 metres after Kipsoro had taken the lead by the 3000m mark, which was passed in 8:23.82.

It was the bell which jolted the field into its final order, with Thompson and Birmingham dropping rapidly off as the trio of Kenyans chased their quarry. And failed to catch it.

In a 100m left wide open by the absence of many of the world’s top performers, Mark Lewis-Francis began to shape up as a medal prospect as he won both his opening rounds in the steamy Jawaharlal Nehru Stadium, the first of them in 10.15sec, the European silver medallist’s fastest time of the year.

Lewis-Francis looked comfortable in both first and second round, winning the latter in 10.20sec, slowing towards the line and looking across to his opponents.

Speaking before his second round, he explained how his coach, Linford Christie – twice a Commonwealth 100m champion – had told him to come out to Delhi and “have fun.”

Lewis-Francis added: “I’m just going with the flow. It would be nice to leave with a medal but it’s early days.

“It’s really hot out here and I’ve never run in conditions like this before. But India is putting on a great show, man. I’m enjoying my moment here.”