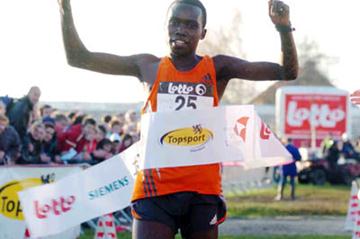 Roeselare, Belgium  Bernard Kiprop Kipyego has set his mind on qualifying for the Kenyan team for the IAAF World Cross Country Championships that will be held on home soil in Mombasa in March 2007. The 20-year-old highly talented Kenyan did not cast any doubt on his intentions as he broke away from the field in the first half of the race, finishing way ahead of his compatriot Richard Limo and local favourite Pieter Desmet.

In the women’s race the more experienced Belgian Veerle Dejaeghere was beaten into second by her compatriot Nathalie De Vos. Adrienne Herzog from the Netherlands secured third place.

Kipyego makes it a one man show

The field remained compact during the first of six laps. Then Limo and Kipyego took command of the race. More pace was injected and that spread the field apart. Belgians Desmet and Jesse Stroobants and Victor Gahungu from Burundi lead the following group, but they kept losing ground. “The Kenyans were a class of their own today,” said Desmet who came in third. “I was not able to catch up when they accelerated and I decided to concentrate on securing the third spot.”

Once the gap was made, Kipyego soon proved to be the best in the duel between both Kenyans. Waving his arms triumphantly, Kipyego responded to the loud cheers of the crowd in the ultimate stages of the race. “This victory looked deceptively easy,” said Kipyego, “but the course was very difficult. We had to struggle at every single stride. Things are going much better for me since I graduated as a student recently. I can focus entirely on my sports now and I hope to improve my level strongly next year. I take a competition break now to prepare for the Kenyan trials. My goals lie with the World Cross Country Championships next year and I absolutely want to defend the honours of my country there.”

As a junior, Kipyego already won a silver medal at the World Cross Country Championships in 2005 in St-Galmier. The confidence about his form was very much boosted today by the outstanding way in which he beat Limo, himself a double silver medallist at World Cross Country Championships. In 2006, Kipyego developed into a world class 10K runner, when finishing fourth at the IAAF Grand Prix in Hengelo in 27:19.45. “I want to become faster in all my track events and to climb very high on the IAAF World Rankings.”

Limo did not prove to be disappointed. “I enjoyed the race and I’m happy with my form. The weather was sunny and nice and the crowd was great. I just didn’t feel very comfortable with the course. There were many turns and bends and that broke my rhythm. Indeed, there is some kind of cross country fever now amongst Kenyan athletes, as the World Championships return home in 2007. The competition with the Ethipians is always tough but we will be extremely well prepared and determined to offer the Kenyan people a great victory.”

Surprise victory for De Vos in the women’s race

The small city of Roeselare is situated in the Flanders Fields region, renown for its wet meadows. “We redesigned the course to make sure it could not be affected too much by the heavy rains of this week,” said meeting organiser Jos Van Roy. “This is a qualifying race for the European Cross Country Championships and we wanted the conditions to be fair and competitive.”

Veerle Dejaeghere ran in front of her home crowd today and she was fairly disappointed about her race. Last year Dejaeghere, a former 1500m runner, converted into a succesful steeplechaser – she finished 5th at the European Championships and ranks IAAF 11th in the event – but meanwhile she earned her living as a school teacher. “I became a professional athlete again three weeks ago, but I still feel very tired. But resting is a difficult option with the European Championships coming closer.”

De Vos moved to the international scene in 2006 when she became 10th at the European Championships in the 10,000m in 31:45.94. The 24-year old lightweight from Gent soared over the course to take victory over Dejaeghere and Dutchwoman Adrienne Herzog. “I’m targeting a top 10 spot in Legnano at the European Championships. In January I become a professional athlete when joining the Army as a medical secretary.”