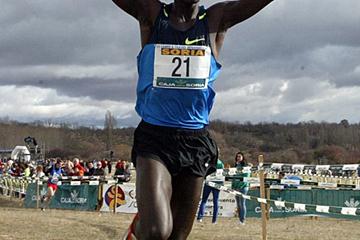 Komon and Kiptoo are successful in Soria

In doing so, the reigning World Cross Country silver medallist Komon took revenge from his defeat to Spain’s Alemayehu Bezabeh in Atapuerca two weeks ago and has now completed a brilliant tally in November on Spanish soil having succeeded at a two XC permits (Quintanar and Soria) to bounce back from his Atapuerca loss.

But also the event’s attention rested on the top Europeans’ performances thinking of the European championships to be staged in Brussels, Belgium, in three-week’s time. To that respect, Spain’s Alemayehu Bezabeh and Portugal’s Ines Monteiro catapulted themselves into one the favourite spots as both performed superbly in third and fourth places, respectively.

Thinking of the Brussels Europeans, Bezabeh is still eligible for the under-23 category but the Beijing Olympics 5000m 11th placed seems ready to tackle the senior event and make an immediate impact in the older age group.

After the opening two laps (4000m) the large leading group was formed by no less than 20 athletes. It was Spain’s  Valencia World indoors 3000m 8th placed Sergio Sánchez who injected a much brisker rhythm with the clock reading 18 minutes and only the Kenyan pair of Komon and Mark Kiptoo plus Bezabeh remained at his shoulder. The decisive movement came with 2000m left when the 20-year-old Komon broke away to built soon a sizeable margin over Kiptoo, who also get rid of Bezabeh.

At the finish line the victor enjoyed a 10-second advantage over his fellow Kenyan, who finished a creditable 14th at the last Worlds in Edinburgh, while the Ethiopian-born Bezabeh romped home another eight seconds adrift to complete a classy podium while a faltering Sánchez could at least keep Italy’s 2006 European junior XC champion Andrea Lalli at bay to take a solitude fourth place.

“It has been a far from easy win since Kiptoo, Bezabeh and Sánchez managed to live with my pace for much of the race and I had to open full gas in the closing loop to take first place. I liked both the circuit and the standard of the event,” confirmed a delighted Komon. To give an idea of the level of the race, suffice to say that the reigning European 5000m champion Jesús España – also a respectable 5th at last year’s Europeans in Toro – had to settle for 11th.

Today’s Kenyan successful journey had begun with the women’s 8000m race, where the victor was a late addition to the field in the guise of Jane Kiptoo, who came third in the 3000m at the World Athletics Final in Stuttgart last September. The 26-year-old arrived to Soria fresh from an overwhelming 31:29 win at a 10km road race held in Madrid last Sunday (16) – not too far from her 31:15.79 10,000 track PB set in Ostrava last summer - so today’s success has just confirmed she’s in awesome form. The women’s race also opened cautiously, maybe due to the Soria altitude (1.063m) and by midway seven athletes had still winning chances, the Kenyan and Portuguese trios plus Spain’s Rosa Morató, the reigning European XC bronze medallist. At the 5000m point the leading group had been reduced to the Kenyans and Portugal’s Ines Monteiro, the later unable to live with the Kenyans’ pace from then onwards.

The key moment came with 1000m to go when Kiptoo left her compatriots Margaret Muriuki – 8th in Edinburgh – and Gladys Cherono with ease to cross the finish line unopposed in 26:40 with a two-second gap on Muriuki, herself three seconds ahead of Cherono.

“Honestly, it has been a surprise for me to perform here today. Anyway I have felt better and better as the race developed and I have taken advantage from the penultimate hill to break away and secure victory” declared the victor after the race.

Emerterio Valiente for the IAAF