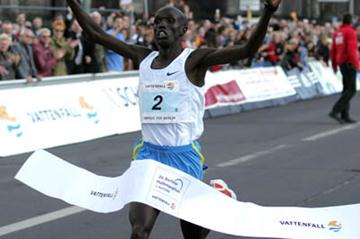 Berlin, GermanyThe best ever Vattenfall Berlin Half Marathon was crowned by superb winning times in its 26th edition on Sunday (02). While Paul Kosgei clocked 59:07 Edith Masai (both Kenya) won the race in a World leading 1:07:16. She beat Deena Kastor (USA) by 18 seconds.

It was the Real-Berlin-Marathon that used to set standards again and again in recent years. Five world records were broken in this still most prestigious road race in Germany. But now there is another big Berlin race that proved that it meets all the requirements for chasing World Records and World Bests. There was no World Record on Sunday but it was close in both races while other records and bests tumbled. There are not many occasions when you see winning times like these for men and women on one day. (NB: All Records and Bests pending ratification.)

Kosgei clocked 59:07 minutes to set a brilliant new course record. Disregarding courses that do not meet the standards for records this was the second fastest time ever run and a Kenyan record as well. Only Haile Gebrselassie (ETH) has ever run faster when he clocked 58:55 minutes this year, a performance that awaits ratification.

After early pacemaking by Kenya’s Abel Kirui, who later finished sixth in 1:01:15, Evans Cheruiyot was a step ahead of Kosgei, when he reached 10 kilometres in 28:18. Wilfred Taragon, who eventually finished third in 1:00:46 was about five metres behind at that point while Joseph Ngolepus ran in fourth position. It was at the 18Km point that Kosgei broke away from Cheruiyot.

“I was optimistic of winning the race when I finally broke away at that point. I had attacked earlier, but could not get away from Evans,” said Kosgei. The 27 year-old had had one previous success in Berlin when he set the World Record for 25Km (1:12:45) two years ago. “Berlin is fine for me.”

Last year the Kenyan had suffered from injuries, but was able to come back with a commanding win in the German capital, lowering the previous course record set by Spain’s Fabián Roncero by 45 seconds.

“I would like to run the Berlin Marathon as well, but I have not decided about my debut yet,” Kosgei added.

Clocking 59:29 Cheruiyot finished runner-up, beating the one-hour barrier along with the old course record as well.

“It was my aim to run such a time, I am very happy”, Cheruiyot said. Kenyans took the first eleven places.

Upset win for Masai over Kastor

There were more records and a surprise in the women’s race, with Edith Masai defeating pre-race favourite Deena Kastor.

The Kenyan, a three time World Cross Country Champion, clocked a world leading 1:07:16. Referring to the above mentioned standards this was the fifth fastest time in history. Berlin’s race director Mark Milde had more records in mind when he positioned official timekeepers at four more spots on the course: 12Km, 15Km, 10 miles and 20Km. That worked out well for Masai as she equalled the national record for 12Km (38:23) and broke the Kenyan 20Km record with a 63:52 en route clocking. Additionally, Kosgei passed the 20Km mark in 56:05, also a pending Kenyan record.

After running closely together for 14 kilometres, it was Masai who surged away after injecting a 3:02 kilometre split. It was simply too much for the American.

“I am very happy to have broken the course record,” Masai said. Kenyan Joyce Chepchumba set the previous best of 1:08:22 in 2000. “During the technical meeting I realised that Deena intended to run the same split times as I wanted. So we changed doing the pace,” Masai explained. “After about 45 minutes I though this is the chance to go and win the race.”

“Of course I wanted to win, but I am happy with my US records,” said Kastor. “I probably have to come back to Berlin to win.”

Kastor will now travel to London to finish her preparation in England for the Flora London Marathon on 23 April. “My result suggests that I am in better form than before my last marathon.”

Kenyan Mary Ptikany was third in 1:09:43, while Germany’s Luminita Zaituc, the defending champion, dropped out.