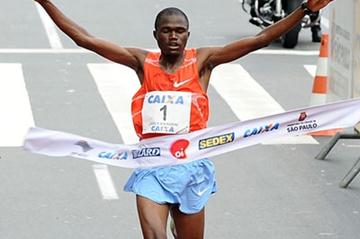 James Kwambai and Pasalia Kipkoech won the 85th edition of the “Corrida Internacional de São Silvestre”, held on 31 December in the streets of São Paulo over 15 km, and with the participation of 21,000 runners –a record for this classic competition.

Kwambai, Kenya’s national record holder of the Marathon (2:04:27 while 2nd at Rotterdam ’09), had previously enjoyed success in São Paulo with his victory in the last edition of the São Silvestre (his time was 44:42), but was coming from a disappointing outing at the New York City Marathon where he didn’t finish.

Yet, at the São Silvestre, his victory was never open to debate. Tanzania’s Martin Sulle set the pace up to the sixth kilometre, and some three kilometres later, at the “Avenida Rio Branco”, Kwambai took the lead, and didn’t have any problems for the rest of the race, despite the 32° C temperature.

“Sadly, I couldn’t have a great preparation for the race, due to my disappointing experience in New York,” said Kwambai. “I would have liked to win with a better time, but the humidity was also high, and that made things very difficult. The hardest moment of the race was between the 8th and 9th kilometre, when I pulled away from the peloton,” Kwambai added.

Another Kenyan, 25-year-old Elias Kemboi, winner of the 2009 São Paulo Marathon and the 2009 Rio de Janeiro Half Marathon, finished second in 44:58, while a third Kenyan Robert Cheruiyot, winner of the São Silvestre in 2002, 2004 and 2007 and also three-time-winner of the Boston Marathon, completed the podium with 45:30.

Pasalia Kipkoech might be just 1.42m tall, and tip the scales at 37Kg, but she certainly dominated the São Silvestre field with ease. Even at the press conference the day before the race, she expressed, “Road racing is very simple. You train hard and therefore you win. I’m well trained, and running very fast, which is good enough to win.”

It turns out that the prophecy from Kipkoech was right. After a conservative start, Brazilian Marily dos Santos agitated the pacing when the race was going through downtown São Paulo. After the “Avenida Pacaembu”, Kipkoech had only Ethiopian Zeyneba Hasso for company. But Hasso was also dropped with ease and Kipkoech ended victorious with a comfortable margin of 29 seconds over Serbian Olivera Jevtic, winner of the 1998 and 2005 editions of the race. Marily dos Santos ended being the best Brazilian of the day (in both races), finishing third in 53:35.

“It was hard to keep a good pace, due to the up and down hills,” said Kipkoech. “I personally don’t like the down hills, so my strategy was to be with the leaders up to the middle point of the race, and then push the pace. That’s what I did, and that’s how I won.”