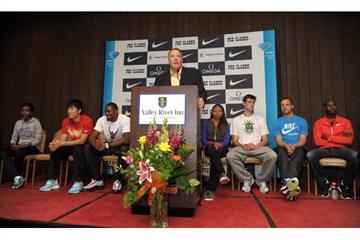 Bernard Lagat the only athlete ever to score a World Championship 1500 metres and 5000m double has confirmed he will race only over the longer distance at this year's championships in Daegu.

His two exciting victories in Osaka four years ago can only be compared with Hicham Guerrouj achieving the same feat at the 2004 Athens Olympics and the legendary "Flying Finn" Paavo Nurmi doing it 80 years earlier in Paris.

Lagat followed up that milestone achievement at the 2009 Championships when placing third in the 1500 and was runner-up over 5000 in Berlin's historic Olympic Stadium.

However this year Lagat will be content with chasing another medal only in the 5000m providing of course he qualifies for the USA team at their trials in Eugene, Oregon at the end of the month.

Significantly, Eugene which is known worldwide as "Track Town USA" where Lagat will run the Two Miles tomorrow (4) in the  Prefontaine Classic – Samsung Diamond League – meeting, is where Lagat who studied at nearby Washington State University, has ran some of his best races.

Neither can the athlete of his appearances on the Hayward Field track. "Gosh I've won the Mile, I've won the 2 Miles and then I've won there many times when in college," although forgetting to mention he also claimed the 2008 Olympic Games 5000m trial race here too.

"They know when to scream loud and...when to take it easy"

Lagat loves not only the atmosphere but the athletics and particularly distance running knowledge possessed by Eugene’s citizens, who are so proud of their heritage of being ‘Track Town USA’.

"It's unbelievable, I've been running here since college days, I've had so much fun," said Lagat. "One thing about this place is you run and you feel that everybody knows what you're doing.

"They know when to scream loud and they like kinda know when to take it easy.  They understand exactly what you're doing and they support you at the right time.”

"Towards the end (of a race) when you feel like someone's catching you, they go crazy. I love it."

Lagat, just back from a gentle training run, ahead of Saturday’s Two Miles, added: "And you know when you do the training just like I did today, you hear people saying 'Hey good luck, good luck' because they see you are a runner.”

"They might not even know whose running but people love it. I mean we were getting waved all the way and that's something I've had ever since coming here.  In the stadium itself on the day of the race everybody's like so happy you can see they're so excited."

Lagat believes an attempt on Kenyan Daniel Komen's long standing  2 Miles world best performance of 7:58.61 set in June 1997 on Saturday is unlikely to succeed firstly because of the quality of the performance and secondly, the timing of the race.

"It is quite tough to run under eight (minutes) especially the race tomorrow as it is going to be at 11 o'clock (AM)," he said. "The body's not ready no matter how you want to push.”

"If it was a night race when the body is used to running I think you would see people coming close to it, but to break it I think would be something else."

Lagat, with even the legendary Haile Gebrselassie having failed to get under eight minutes and using pacemakers, added: "It is hard for anyone even to come close to it.”

"They have to kinda go easy at the beginning then try to push at the end, but then you also have to have another pacesetter who is going to help you after the first drops out.

"I think for it to be broken and even someone to come close to "8" would be to run not too hard in the first place but maybe 4:02 or 4:03 and then keep it going.

"I don't see tomorrow being like that. I plan to sit back right there and monitor how the race is going and just use my good calculation and just run hard as possible towards the end."

However, his eye is on Matt Tegenkamp's four-year-old USA record of 8:07.07, he said: "I'm excited. If I run say 8:08 that would be okay. Anything faster than that I would be very happy."

Lagat after the trials will head off to Europe and also compete at an international meeting in Tangier, Morocco, organised by his old rival El Guerrouj on 17 July, and then a few days later race at the Samsung Diamond League event in Monaco.

"I will go and run in Morocco over 2km and then after that we will go to Monaco and to the 5000 which we are hoping is going to be a fast race on 22 July,” he revealed.

Lagat whose fastest 5000 is the 12:54.12 in Oslo last summer, added: "I want to run my personal best and that would also mean another American record."

If successful that would certainly see him considered a major challenger for another World Championships medal in what has been and promises to continue to be, for a few more years to come, a highly successful career.

Lagat, 36, looking towards his future insisted: "I still want to believe I can run fast but I have also got to be realistic. But at the same time I'm setting my goals high for the 5000 as 12:49.