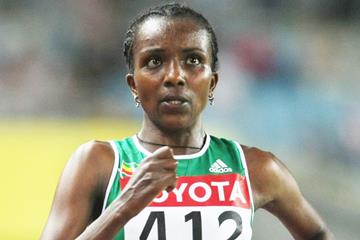 Leading Ethiopians Dibaba and Defar to double up in Moscow

Two of Ethiopia’s biggest athletics stars will attempt a long-distance double at the IAAF World Championships in Moscow on 10-18 August.

Three-time Olympic gold medallist Tirunesh Dibaba and double Olympic champion Meseret Defar have both been selected in the 5000m and 10,000m. Dibaba won gold in both events at the 2005 World Championships and the 2008 Olympic Games, but her attempt at the same double at last year’s Olympic Games was ruined by Defar, who triumphed in the 5000m.

Defar has attempted distance doubles at the past two World Championships, but neither bid went to plan. She took 5000m bronze on both occasions, but finished fifth in the 10,000m in 2009 and did not finish the 25-lap event in 2011.

Dibaba – whose sister Genzebe is entered in the 1500m – has missed the past two editions of the World Championships, but also heads to Moscow in top form, having posted a world-leading 14:23.68 in the 5000m in Paris.

The pair have raced against each other just four times since 2006, their last encounter being the 2012 Olympic 5000m final where Defar was victorious.

The Ethiopian entrants on the men’s side are just as strong. World junior cross-country champion Hagos Gebrhiwet and Olympic finalist Yenew Alamirew are entered for the 5000m, while World indoor champion Mohammed Aman will be a serious contender for gold in the 800m, having won his past seven races.

Olympic 5000m silver medallist Dejen Gebremeskel will step up in distance to the 10,000m, having clocked a world-leading 26:51.02 on his debut at the distance earlier this year. He will be joined in that event by reigning World champion Ibrahim Jeilan.