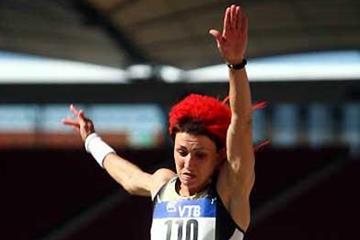 Tatyana Lebedeva supporting her lurid red hair-do, on her way to victory in Stuttgart (Getty Images) © Copyright
31 MAY 2008 General News

Lebedeva back with 14.59m; No power failure for Russian stars in Dessau!

Two days before Berlin’s ÅF Golden League opener DKB-ISTAF a different German meeting held its 10th edition: ‘Anhalt 2008’ in Dessau, which is little more than 100 kilometres away from the capital.

6000 spectators saw the return of Tatyana Lebedeva in the Triple Jump and other fine results by Russian athletes in this EAA Permit Meeting. At the end of the meeting, which took place in very warm temperatures with some wind, there were fireworks, but before a major power failure in the arena had caused a delay of the programme.

Russia’s Lebedeva came back in style. It was the first time that the reigning World and Olympic Long Jump and European Triple Jump champion has competed since she had surgery on the Achilles tendon in her left ankle in October last year.

“Jumping a meeting record was my first goal, because the organisers had hoped that I would do them this favour. My second goal was to jump beyond 15 metres. But I was not good enough for that today,” said Lebedeva.

The problem was that Lebedeva had recently mainly trained for the Long Jump and used a shorter run-up. “That was why I had some technical problems today. But I will improve,” said Lebedeva, who finds it difficult to find suitable Triple Jump competitions this season and therefore came to Dessau on short notice. “There are very few meetings who have the Triple Jump included in their programme.”

Lebedeva’s next meetings will be Tallin and Prefontaine – and it will be back to the Long Jump for her in both. “At the Olympics I would like to double again,” said the World champion in the Long Jump from Osaka, who also won a silver in the Triple Jump in 2007. “Because of the gold I am already selected for the Olympic Long Jump competition, but I still have to qualify for the Triple Jump.”

Another fine Russian victory came from Daryia Pishchalnikova in the Discus Throw. On her final attempt she achieved her best result with 65.59m. After a weak start with 59.35m Pishchalnikova continually improved, throwing 60.66m, 62.59, 64.36, x and finally 65.59. “The beginning was not so good, maybe I was a bit nervous. But I am very happy with my winning mark,” said the Russian. While Germany’s World Champion Franka Dietzsch was absent from competition because of an injury problem the Russian winner was asked about her Olympic ambitions: “All the people talk about my chances – but I don’t want to say anything.”

In the men’s events Ukraine’s Sergey Demydyuk took the 110m Hurdles. Charging into the lead after about 40 metres in the end he just held on to his advantage, clocking 13.60 seconds. Thomas Balschek was closing the gap in the final part of the race but could not quite catch Demydyuk. The German, who had hoped to break one of the two qualifying times for Beijing in Dessau (Germany’s federation asks for one sub 13.50 and one sub 13.45 time), was timed with 13.61.

“In training I am doing much better. So it is a question of transforming that form into competition. But I think I will soon be there,” said Blaschek, whose next race is at Sunday’s DKB-ISTAF in Berlin. “Thomas has trained hard recently, so I am confident that he will improve soon and that he will already do better on Sunday,” said his coach Idriss Gonschinska.

The men’s Pole Vault produced a surprise winner. While eyes were on Russia’s Evgeny Lukyanenko (second with 5.71) plus the Germans Tim Lobinger (fourth with 5.61) and Danny Ecker (fifth with 5.61) it was Sergey Kucheryanu who snatched victory. The 22-year-old Russian achieved a personal best of 5.81m at his second attempt. Indoors he had cleared 5.76m this season, outdoors his mark was at 5.70. “I knew I could jump 5.81m since I had done so in training,” said Kucheryanu.

While Gable Garenamotse of Botswana took the Long Jump with a meeting record of 8.10m (nil wind) beating Finland’s Tommi Evilä, the 2005 World bronze medallist who looks to be fit again after two years of fruistrating leg injuries. Late last summer the Finn returned with a wind assisted 8.41m in Gothenburg. Last night in Dessau Evilä had a best of 791/+0,1.