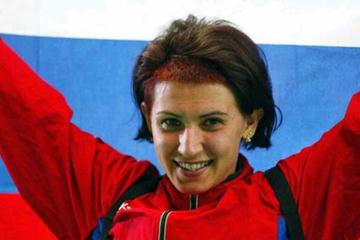 Lebedeva proved once again the extent of her talent by winning the competition with a world-leading performance of 6.95m, which improves her own mark by two centimetres. Lebedeva had a consistent series which also included 6.90m and 6.91m jumps. Clearly the seven-metre barrier seems within the Russian’s reach.

Runner-up yesterday was Irina Simagina who also landed at 6.95m and took a well deserved silver medal on count-back. Unfortunately it seems unlikely that Simagina will make the team for Budapest as Lebedeva confirmed she will double up in Hungary and the other qualifying spot has already been promised to defending world indoor champion Tatyana Kotova, who had decided to skip the national championships.

“This will be my first real test at competing in two events in a major competition before the Olympic Games,” said Lebedeva.

“In Athens I‘ll try to win in both events if I remain in good health and avoid injuries. I understand that the program in Budapest is very packed and there will be no time to rest but I feel very confident in the triple jump. In the long jump I certainly need to get more experience. I just want to get a feeling of a real competition in this event.”

Lebedeva hopes a 6.95m performance will be enough to win gold in Budapest but doesn’t underestimate the talent of her countrywoman Kotova whom she knows is capable of much better results.

“I know Kotova is very experienced," added Lebedeva. "She is a phenomenal jumper and she is able to beat me. For now let’s see how our first direct competition, next week in Athens, goes.

“I do not want to make the long jump my main event. I just wonder how good I can be at it. I do not make any special training for the long jump; I am doing everything in the same way of the triple jump. The only difference is that I am making my flight after the first step.”

In other field events, Yaroslav Rybakov won the high jump with a 2.30m clearance while Andrey Tereshin and Sergey Kliugin jumped 2.28m. Rybakov was disappointed not to be able to jump any higher.

“I feel that I am much stronger then my rivals,” he said. “But now is a period when I am still trying to learn a new technique which should help me improve dramatically. All the tests show that I have a great speed and strength. My old technique did not provide the opportunity to use my quality.”

Rybakov is aiming at being among those who contest the gold medal in Budapest. He knows it’s just a matter of time and is waiting for the right competition when he is finally able to move up a notch.

In the women’s 200m world silver medallist Anastasiya Kapachinskaya easily won the final in 22.90 preceeding across the line Svetlana Goncharenko who clocked 23.17.

Kapachinskaya said she wanted to win the national title with the minimal efforts and she tried to forget about her silver medal in Paris because now everything starts from the beginning, it is a new stage of preparation for the Olympic Games.

“In Budapest I expect to be fighting hard against the American and French runners but first I have to make it to the final," she said. "Then I’ll think about winning gold.”

Tatiana Polnova won the pole vault with a 4.60m clearance. She knew she had no chances of entering the Russian team for Budapest as the national selectors had announced earlier in Donetsk that Yelena Isinbayeva and Svetlana Feofanova would defend the Russian chances in that event at the World Indoor Championships.