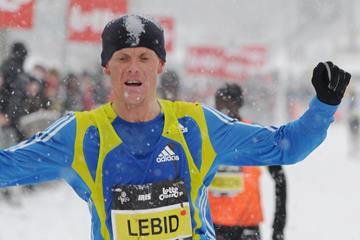 19 December 2010Brussels, BelgiumFor the second time in a row the IAAF Cross Country Permit in Brussels suffered from a heavy snowfall and very wintry weather conditions. In a true test of stamina and character Ukrainian Sergiy Lebid in the men’s race and Kenyan Caroline Chepkwony in the women’s race required an ultimate effort to take victory.

A small leading group of athletes was formed early in the race with Kenyans Isaiah Koech and Japeth Korir most often running in front. All of a sudden  Korir dropped off the pace and Isaiah Koech continued to wind it up. His compatriots David Kiprotich Bett and Paul Meli were able to hang on and so did Sergiy Lebid, even though the Ukrainian was all the time trailing behind in the leading group.

At the bell only three athletes were left in the lead. With 600m to go Lebid surprisingly attacked in a long downhill section and made a gap of 30 meters with Koech and Meli. The nine-time European cross country champion held off the Kenyans and crossed the line in triumph. Both physically and tactically, Lebid was supreme in Brussels today and he was loudly cheered for that by the spectators.

Although 35 years of age, Lebid looked very healthy and talked to the press full of ambitions : “The last two or three years I was troubled by injury. In January I had surgery and I recovered fine from that. It gave me new energy. Last week I won another European title and it only makes me dream of winning it for the tenth time. The secret of my succesful career is that I love running. This season has only just begun for me, with two great wins in one week time. I will decide mid-January about continuing cross country running or to focus instead on the European 3000m indoor championships in Paris.”

Asked about his Marathon plans there is a big smile on his face : “Maybe after the London Olympics !”

Fionnuala Britton from Ireland was the first to try and break the field with Kenyan Prisca Jepleting taking over at the end of the first lap. Then Jessica Augusto moved into the lead, making the race faster and more attractive yet. Four more athletes stayed with the pace of the Portuguese, Britton, Jepleting, Caroline Chepkwony and Purity Cherotich.

In the third of four laps Augusto furiously accelerated and moved away from the leading group. Augusto turned to the finishing straight but then realised that there was one more lap to go. As a consequence, she badly faded into 6th place. Caroline Chepkwony had been trailing all the time at the end of the leading group and eventually even lost contact with it. But when Augusto was overtaken the pace in front dropped and Chepkwony almost cruised past Britton and Jepleting to win the race from behind.

“I didn’t feel comfortable at all during the race,” said Chepkwony. “The heavy snow fell in my eyes and I could hardly see anything. At some point, I even thought about abandoning, but still I kept struggling to defend my top 5 spot. It was a surprise for me that the women in front suddenly slowed down and that I could make an ultimate effort to win it here.”

“Great battles in the front and tense competition in both races and the fans turned up in spite of the exceptionally heavy snowfall,” concluded meeting organizer Jos Van Roy.