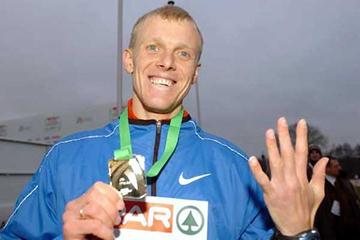 Waving to the wildly cheering crowd as he approached the final straight of the challenging 9.640km course, the 29-year-old Ukrainian reached the finish in 27:31, more than 23 seconds ahead of Spaniard Juan Carlos de la Ossa.

"The last 500 metres were pretty emotional," Lebid said after a fourth consecutive win and fifth overall that broke his individual victory tie with Portuguese great Paulo Guerra.  "I felt really strong in the last 500 metres, and even stronger in the last 200 metres. I felt I could have run like that for hours."

De la Ossa quickly jumped to an initial lead, but by the time the field raced through the first two kilometres, Lebid was already comfortably tucked on the Spaniard's shoulder, seemingly biding his time before making his move. But de la Ossa's style appeared equally as comfortable for the next kilometre and a half, as the lead pack of a dozen was reduced by half. Austrian Gunther Weidlinger and Portugal’s Pedro Ribeiro remained in the lead pack, along with Frenchmen Driss Maazouzi and Mounir El Housni. Lebid moved to the front 16 minutes into the race with the Spaniard giving chase, a battle that proved very short-lived.

The Ukrainian’s decisive moved came with 3000 metres to go, a lead he extended to more than 30 metres as he entered the final 1500-metre lap.  De la Ossa never challenged again, but also remained unchallenged for the runner-up spot. Maazouzi overtook Weidlinger in the final lap to finish third in 28:05, three seconds ahead of the Austrian.

Lebid hadn’t raced since his appearance in the first round of the Olympic 5000 metres, leaving his fitness coming into the championships a prime topic of speculation. But de la Ossa was never among the doubters.

"He's the strongest at the finish, and he showed his strength today,” said de la Ossa, the top European finisher at the Cross Internacional Valle de Llodio two weeks ago. “He is the best, and showed it here. I'm very happy with second."

Lebid smiled when asked to select the favourite from his five titles. But he was noncommittal.

"Each victory is very important," he said, adding, "but this one is the most special."

Maazouzi led France to a commanding title defence in the team race. With two others in the top ten - El Housni was fifth in 28:14, nine seconds ahead of teammate Mustapha Essaid - France handily defeated the surprisingly strong performance by Italy with a 26 to 44 point tally. This was the third team win for France, with their first coming in Malmö in 2000.  The Italians – paced by Umberto Pusterla and Maurizio Leone, eighth and 11th overall - topped Great Britain’s 59 points to claim the silver.  It was only the second top-three finish for Italy, the champions in 1998. For the Britons, led by veteran Karl Keska’s seventh place showing, it was only their third podium finish ever after their bronze-winning effort in 1995 and their win in 1999.

Discounting Lebid’s win, the cool, hazy Baltic morning and afternoon was littered with surprises, with Barnabas Bene’s win in the 5.640km junior race among the biggest.

The 18-year-old Hungarian blasted past two-time defending champion Yevgeniy Rybakov in the final 85 metres to win in 16:18, more than a second ahead of the Russian.

“I went into the race knowing that I will be the one that can sprint out the big favourites, the Rybakov twins,” Bene, who finished 27th last year, said. “It was my tactic to beat them in the last 80 metres, and that’s what I did.” Bene, who was tenth in the 1500m at last summer’s World Junior Championships, was also this year’s national 1500 and 3000m champion.

Biding their time in the first lap, the leaders quickly made it a four-man scuffle seven minutes into the race, when defending champion Yevgeniy took command. But with half a lap to go, it became clear that a Rybakov 1-2 repeat wouldn't be repeated. Anatoliy fell far off the pace, and Bene fought on unrelenting.

“I did not know the Hungarian before the start,” Yevgeniy Rybakov said. “I expected to dictate the race together with my brother. I never thought that Ben would be able to follow us.”

Finding the hilly windy course extremely difficult, Anatoliy Rybakov was a distant third in 16:33, three seconds ahead of Lukasz Parszczynski of Poland.

The Rybakovs did manage to lead Russia to their third straight team title, beating back the strong Irish challenge, 42 to 54. Great Britain (63 points) was third.