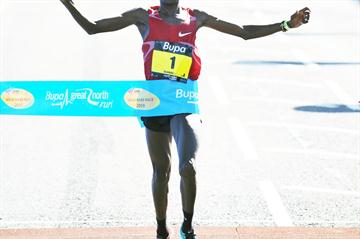 Lel, Mutai, and Pavey will be joined this weekend by Olympians Juan Luis Barrios and Jaouad Gharib at the BUPA Great North Run in Newcastle, England, as they ready themselves for November’s ING New York City Marathon, an IAAF Gold Label Race.

“The field for the ING New York City Marathon 2011 is going to blockbuster strong,” said New York Road Runners president and CEO Mary Wittenberg. “We’re ensured a great race when we have the likes of two-time champion Martin Lel, London champion Emmanuel Mutai, and perennial contender Jaouad Gharib. And we’re honoured to host Jo Pavey as she continues her buildup to the London 2012 Olympics in her home country.”

Lel, 33, of Kenya, has run the New York City Marathon twice and won it both times, in 2003 and 2007. He has also won three London Marathons and has placed in the top three in 11 of his 12 marathon finishes. Lel bounced back from two years of injuries last spring when he finished second in London. This will mark his first return to the New York City Marathon since his 2007 victory.

Mutai, 27, of Kenya, finished second at the New York City Marathon 2010 behind champion Gebre Gebremariam, who will also be back in 2011. Mutai set his personal best this past spring when he smashed the course record at the Virgin London Marathon with a time of 2:04:40, winning by 1:05 and becoming the fourth-fastest marathoner in history on a certified course.

“I always aim for the win and I prefer to do that in the biggest races our sport has, so it's an honor to be part of the New York City Marathon again,” said Mutai. “Winning New York would mean I have won two of the biggest races in the world in one year. I know I have a chance to win the overall World Marathon Major title as well, but I can't battle in two races at the same time. So I will just do the maximum during the race and the only place to count points is behind the finish line in Central Park."

“I’m really excited to be coming back to New York to race for the third time this year, and to be finally toeing the line in Staten Island,” said Pavey. “No Marathon career would be complete without competing in the New York City Marathon, and it’s great that my second Marathon will be in a race that has such a tremendous history. NYRR has assembled a strong field, and a world-class race is exactly what I need ahead of an Olympic year. The Marathon is new to me and I’m finding the new challenge really motivating—I can’t wait for November 6th!”

Barrios, 28, of Mexico, was a 5000m finalist at the 2008 Olympic Games, finishing seventh. He made his Marathon debut earlier this year at the Lala International Marathon in Mexico and finished third in 2:14:20. In 2010, Barrios earned two golds at the Central American & Caribbean Games in the 1500m and the 5000m.