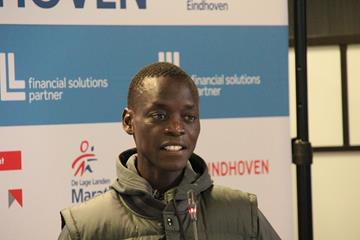 Leonard Komon, the 10km and 15km world record-holder on the roads, revealed he has been inspired by the recent 2:02:57 world record set by his compatriot Dennis Kimetto and will have it in his mind during his marathon debut at the 2014 De Lage Landen Marathon Eindhoven on Sunday (12).

“I met Kimetto in Eldoret (near their homes in Kenya) a week before he ran in Berlin. We didn’t plan to meet up but we were both in the town doing some tasks, our paths crossed and we started talking,” recalled Komon, in the wake of Kimetto's historic run at the Berlin Marathon on 28 September.

“He was telling me about how he was in world record shape and how he was going to attack the world record in Berlin. I know Kimetto so I took his words seriously, but it also led me to think about myself, what sort of shape I am in and what I think I can do here in Eindhoven,” added the thoughtful and erudite runner, speaking at a press conference in the Dutch city on Thursday.

“Then, I watched the Berlin race on television at home, saw what happened in the race, and saw how Kimetto broke the world record.

“It was very interesting and even though I am not thinking about the world record on Sunday, it provided me with a lot of inspiration and ideas about how to run a strong marathon.

"And maybe one day I can break the marathon world record as well but I think, like Kimetto, I will need two or three races to understand the marathon.”

Komon, now 26, has been focusing on his first race over the classic distance since June.

“At the start of the year, my manager (Marc Corstjens) asked me whether I thought I was ready to run a marathon. I took a long time to think it over because I still felt I have some unfinished business at the half marathon, after world records at 10km and 15km.

“I wanted to go up the distances gradually. However, I came to the conclusion that I was ready and I changed my training to focus on it.”

Nevertheless, back in March, Komon won the Vattenfall Berlin Half Marathon in 59:14, the fastest ever debut over that distance.

“I would have liked to have broken the half marathon world record there and I didn’t do it. Depending on how I do on Sunday, maybe I will make another attempt on the world record next year.

“For Sunday, I have 2:05 and breaking the course record as my target time. I think the course is nice, very fast. I saw what is possible when I was here in August to inspect the course.

“We need the pacemakers to cooperate and I am thinking about running 1:02:30 or 1:02:40 for the first half of the race," said Komon, "and then run the second half faster; just like Kimetto in Berlin."