China’s Liu Xiang ran to what initially seemed a World record equalling run of 12.87 seconds in the men’s 110m Hurdles at today’s 38th Prefontaine Classic - Samsung Diamond League, but soon discovered the wind was over the 2m/s allowable legal limit for records. Nevertheless the victory of the 2004 Olympic and 2007 World champion was the highlight of the main competition programme in Hayward’s Field and his path over the flights of barriers so smooth and assured that the World record seems likely to be back in his grasp before very long.

Overall Saturday’s programme saw seven world season leads improved and five meeting records tumble, bringing the totals of those achievements over the two days in Eugene respectively to 10 and 7, highlighting the top quality of the action.

London favourite... "its just a race"

In the process of his victory which was run with a 2.4m/s wind Liu Xiang beat all the main contenders for the Olympic title with the exception of World record holder and reigning champion Dayron Robles who could not make the planned trip due to travel visa problems.

"I never think I can run that fast, but I think I'm ready for that. You never think about what time you can run," commented Liu Xiang who on being asked about his position as favourite for the Olympic title calmly replied, "its just a race."

Farah wins well and tries not to 'overcook it'

A year ago Mo Farah earned the respect of the crowd at Hayward Field with his then world leading 10,000m time. Today he soared to the top of the world 5000m lists with his meet record of 12:56.98 in front of 12,000 screaming spectators.

The race was certainly not gifted to him.

Isaiah Koech chased Farah to the finish in 12:57.63 while his training partner Galen Rupp a former University of Oregon runner, dipped under 13 minutes for the first time in his young career (12:58.90).

"I take a lot from this race," Farah said afterwards. "If you look at the field it was really loaded. The most important thing is to win in a class field like that. The second is to run a fast time. I am really happy with the result today."

"I do feel great. I just managed to hold him off and that’s the important thing. I don’t know how fast I ran the last lap. It was o.k." Asked if he is fully prepared to do battle at the London Olympics he smiled and chose his words carefully. "I am definitely there," he conceded.

"I’m winning races. I don’t want to overcook it. Alberto (Salazar) is the boss. He tells us what to do. He’s been there himself before so he understands what an athlete has to do. It’s nice to have a coach like that where you can rely on him rather than someone else who hasn’t been to a World championships or an Olympics."

"I am really happy that my training partner Galen (Rupp) went under 13 minutes for the first time. This track is pretty famous and no American has ever gone under 13 in Hayward Field. It’s nice for him to do that."

Richards-Ross is back in the driving seat

"I felt really good," Richards- Ross declared, "I wanted to come out and execute really well. I felt that I didn’t really execute well in Jamaica. I did today and now I have the world leading time."

"I know I am in the best shape I have ever been in. My training has indicated that. I think I think I have the best coach in the world and we are able to maintain our peak for the entire season. Running 49.39 means I will keep getting better."

Merritt takes win over World champion who is DQd

The men’s 400m was also a terrific competition but not without drama. All three medallists from last year’s World championships lined up for the start with the champion, Kirani James of Grenada running in lane three just inside of the Olympic champion LaShawn Merritt, the current world season leader 44.19.

James was dq’ed for a false start and officials removed his starting blocks delaying the start but he asked to run under protest. At the second attempt he went out very hard and drew alongside Merritt at 200m but with thirty metres remaining Merritt squeezed by.

The winner discounted the affect the false start might have had on some of the competitors.

"You know everybody was dealing with the false start," Merritt said. "It wasn’t like it was just me. There’s grown men in this event.You go back and re-group, line up and when the gun goes off you handle your business."

In the end James’s disqualification held up and Christopher Brown of the Bahamas was given 2nd place in 45.24 seconds. Angelo Taylor was third in 45.5 just two one hundredths in front of 2011 World Championship bronze medallist Kevin Borlee of Belgium. The 2004 Olympic champion Jeremy Wariner was a visibly disappointed 5th in 45.68.

In the clash of world class shot putters Reese Hoffa came out ahead with a monster heave in the second round (21.81m) - a world season leading performance. It also takes him to the top of the Diamond Race.

18-year-old Mohamad Aman of Ethiopia, who is the only man to have beaten the world record holder David Rudisha in the last two years, was caught inside Nick Symmonds as they came down the home straight and just fell short of catching the Sudanese hero. His time was 1:43.74.

He was angry with himself for his tactical error. "It’s my fault. I was inside, I didn’t get the space to move out. But it’s a good race," said Aman. "It did much for my confidence It is my fault to lose but I will think about what I did wrong and improve."

For Kaki, who trained in Kenya for three months this past winter, this was an important gauge of how his programme is working. "It was the first race for me after Doha," he said. "It wasn’t very quick. Maybe next time I will run well. Of course it gives me confidence especially after some very hard training. Everything is good now. I will go to New York and race Rudisha."

"Rudisha is my friend. we started together in 2005. He is the favourite. I like that because sometimes you need that to keep training (hard)."

The women’s High Jump evolved into a battle between two Russian athletes Anna Chicherova and the consistent World championship finalist Svetlana Shkolina. The latter had first time clearances all the way to 2.00m which is a personal best for her while Chicherova needed two attempts to make it. Chicherova, the 2011 World champion, made 2.02m on her second go to set a new meet record. It was also a world season leading mark.

"I feel good really," said Chicherova. "After Istanbul at the Indoor World Championships I was injured and have had a tough time really. And I have had no time for preparing and I'm really surprised. I'm glad I can jump 2.02 but in truth I just don't want to be second."

The American Chaunte Lowe managed 1.97m to gain a valuable Diamond Race point to stay ahead in the series rankings.

The 2004 Olympic 100m champion Justin Gatlin held off Jamaica’s Nickel Ashmeade to win in 9.90 seconds. The 22-year-old Jamaican ran a personal best of 9.93 for second place while Trell Kimmons (USA) ran his fastest time of the season (10.04) for third.

Allyson Felix was pleased to win her first 200m outing of the season in 22.23 seconds with the class to which athletics fans have grown accustomed. Her training partner, Jeneba Tarmoh took second in 22.61 with Blessing Okagbare of Nigeria third in a personal best of 22.63. Carmelita Jeter, World 100m champion and 200m silver medallist (ahead of Felix) last year, was never in the race finishing in 22.78 for fifth.

"I felt like I could push myself a little more at the end but this was just kind of seeing where I am at," said Felix . "I train with Jeneba and she is really strong on the curve so it was good to get out there with her."

Then it was Morocco’s Mariem Alaoui Selsouli who handed 2011 World championship 10,000m silver medalist Sally Kipyego of Kenya a crushing defeat with a front running 3000m performance of 8:34.47. Although the Kenyan was closing fast the Moroccan had a lead of some forty metres at one point and cruised across the line.

Kiprop romps home in the Mile in a world lead

The final event of the afternoon programme was the Bowerman Mile and it lived up to its expectations. World and Olympic 1500m champion Asbel Kiprop had come here looking for a meet record. The Kenyan fell short but still won in a world leading time of 3:49.40. Mekkonen Gebremedhin of Ethiopia earned second in 3:50.17 just holding off the 19-year-old Djibouti sensation Ayanleh Soulemain who finished in 3:50.21. So deep was the field that Bernard Lagat was 14th in 3:54.28.

There was a meeting record win for Vadims Vasilevskis in the men's Javelin Throw with 84.65 which got the better of Czech Vítezslav Veselý (83.78), the winner in Shanghai, and New Zealand's world season leader Stuart Farquhar (82.23).

World champion Fabiana Murer prevailed in the Women's Pole Vault with 4.63m, her season's best. The world leader and World champion Britney Reese was way off form in the Long Jump finishing in seventh (6.48m), a competition won surprisingly by Britain’s Shara Proctor with a PB of 6.84m. 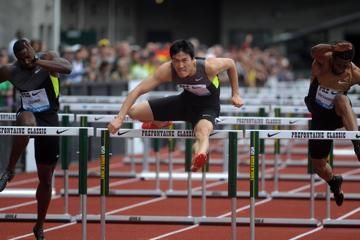