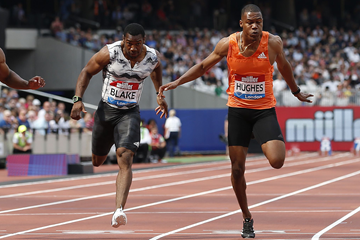 Triple Olympic medallist Andre De Grasse and 2011 world champion Yohan Blake will line up for the 100m at the Muller Anniversary Games to take on Britain’s two leading lights in the event at the IAAF Diamond League meeting on 20-21 July.

For De Grasse, 2019 will serve as the year in which the Canadian looks to return from a spell of hamstring issues and reassert his authority on the global sprinting stage. A triple Olympic medallist in 2016 with silver in the 200m and bronze medals in the 100m and 4x100m, De Grasse will be making his first appearance in London.

Blake is no stranger to the London Stadium, having won three Olympic medals there back in 2012. The second-fastest man in history over 100m with a best of 9.69, Blake has raced against De Grasse just once before, finishing just 0.02 behind him in the 100m at the 2016 Olympic Games.

Having set a lifetime best of 9.91 last year and won the European title in the event, Zharnel Hughes returns to the London Stadium this summer looking to go one better on his second-place finish at last year’s edition of the event.

Fellow Briton Reece Prescod will also relish lining up in his home city this July. The European silver medallist and world finalist set a PB of 9.94 last year and has the long-standing British record of 9.87 in his sights.

Fresh on the back of multiple world and Olympic medallists being confirmed in the women’s equivalent in Dina Asher-Smith, Elaine Thompson, Dafne Schippers and Marie-Josee Ta Lou, the announcement of the quartet comes as the countdown to July’s event continues.