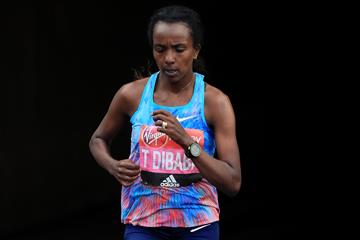 Organisers of the 2018 Virgin Money London Marathon have confirmed that Tirunesh Dibaba and defending champion Daniel Wanjiru will return to the IAAF Gold Label road race on 22 April.

The 32-year-old Ethiopian, who has three Olympic gold medals and five World Championship victories to her name on the track, is the first major name confirmed for the elite women’s race.

Dibaba has twice appeared in London before and has improved with each performance. She made her marathon debut in London in 2014, finishing third in 2:20:35 before returning last year and coming second behind Mary Keitany in an Ethiopian record of 2:17:56, putting her third on the world all-time list behind Paula Radcliffe and Keitany.

She returned to the track last summer to win a silver medal in the 10,000m at the IAAF World Championships London 2017 before picking up her first marathon win at the Chicago Marathon in October (2:18:31).

That victory put her joint top of the Abbott World Marathon Majors (AWMM) Series XI leaderboard which started with last year’s Virgin Money London Marathon and concludes after this year’s race, counting the results of the World Championship marathon plus the marathons in Berlin, Chicago, New York, Tokyo and Boston in between. A win for Dibaba in London this year will ensure she would secure the AWMM Series XI title.

Dibaba will face world champion Rose Chelimo. The Bahraini athlete won the world title in London last year, four months after finishing second in Boston in a PB of 2:22:51.

Wanjiru was a surprising winner last year, clocking 2:05:48 to hold off Kenenisa Bekele. The 25-year-old, who set his PB of 2:05:21 when winning the 2016 Amsterdam Marathon, went on to finish eighth at the World Championships last year.

Biwott, the 2015 New York City Marathon champion, pushed his compatriot Eliud Kipchoge to within eight seconds of the world record at the 2016 London Marathon as the pair battled it out over the second half of the course.

The 31-year-old finished second to Kipchoge on that day in 2:03:51, making him the sixth fastest marathon runner in history. It was the second time Biwott finished runner-up at the London Marathon after trailing only Wilson Kipsang in 2014.

Adola is another man who has pushed Kipchoge to the limit. The 27-year-old looked on course for a shock win at last year’s Berlin Marathon before Kipchoge recovered to win in the final miles. Adola’s time of 2:03:46 was the fastest debut marathon ever.

Organisers of the London Marathon have also announced several British additions to the fields.

Charlotte Purdue, who was the first British woman home in 13th place in the marathon at the 2017 World Championships, returns for the third successive year. Purdue has run the past two London Marathons, finishing 16th in 2016 in 2:32:48 and 15th last year in a PB of 2:29:23.

She will be joined on the start line by Lily Partridge, who will be making her London Marathon debut. Partridge, who has represented Great Britain on the road, track and cross country, made her marathon debut in Seville last year, finishing in a time of 2:32:10.

Jonny Mellor, who set a PB of 2:12:57 at the Berlin Marathon last September, will compete in the elite men’s race alongside Olympian Tsegai Tewelde and Aaron Scott.