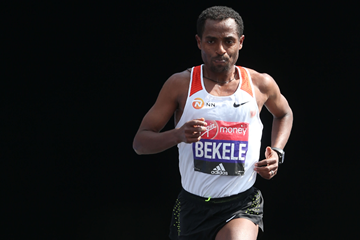 The three greatest distance runners of their generation will race the Virgin Money London Marathon after Ethiopian legend Kenenisa Bekele confirmed he will join Mo Farah and Eliud Kipchoge on the start line for the IAAF Gold Label road race on 22 April.

Bekele has run the past two Virgin Money London Marathons. He finished third in 2016 in 2:06:36 when he admitted he was at just 90 per cent fitness, and was then second last year in 2:05:57 behind Daniel Wanjiru.

“I am thrilled to be returning to London for the third year in a row and would love to go one better than last year and win the race,” said Bekele. “Once again London has brought the best distance runners in the world together so I know it will not be easy.

“It will be an honour to race alongside Sir Mo Farah and Eliud Kipchoge as well as the other great athletes in the field. I have been training very hard with the aim of arriving in London in April in the best possible condition.”

“This is a truly mouth-watering prospect,” said event director Hugh Brasher. “Mo, Eliud and Kenenisa could all put forward a persuasive case for being the GOAT (the greatest of all time) and now they meet for the first time over the marathon distance at the Virgin Money London Marathon on Sunday 22 April.”

The 2018 Virgin Money London Marathon is also the conclusion of the Abbott World Marathon Majors Series XI which started at last year’s London Marathon and includes the major marathons of Berlin, Chicago, New York, Tokyo and Boston, as well as the 2017 World Championships marathon.

Kipchoge is currently joint top of the series standings thanks to his win at the BMW Berlin Marathon last September alongside the 2017 winner of the Virgin Money London Marathon winner Daniel Wanjiru, the 2017 champions of Chicago (Galen Rupp) and New York (Geoffrey Kamworor) and the world champion Geoffrey Kirui.