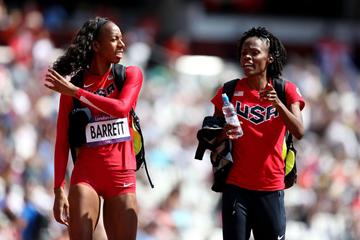 The women’s High Jump at the 106th Millrose Games will be truly memorable as USA’s Chaunte Lowe and Brigetta Barrett today announced that they will compete at the Armory on February 16.

Barrett won a surprise silver medal at the 2012 London Olympics with a personal best of 2.03m.

“I’m very excited to come back home and compete where it all started for me in the world of track and field,” said Barrett. “The Armory has always been one of my favourite places to jump. The energy is always great.”

Lowe, 29, holds both the indoor (2.02m) and outdoor (2.05m) American records and is the reigning World indoor champion.

“I love to compete in the United States where I’ve had my best indoor results,” said Lowe, whose appearance at Millrose will be her only indoor competition of the year. “Millrose and New York are special and both have a lot of tradition. Winning there would be one of the highlights in my career.”

Meet director Ray Flynn is excited at the prospect of the Lowe-Barrett head to head. “Here are two of the most dynamic and entertaining athletes in all of track and field,” he said. “Their appeal to the fans is amazing.”