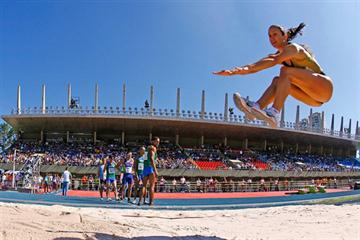 Maggi and Chambers the standouts in São Paulo

After being defeated last weekend in Belém by American Brianna Glenn and fellow Brazilian Keila Costa, the 34-year-old Maggi bounced back with a brilliant competition, which the Paulista dominated from her first jump. Maggi produced an impressive series: 6.84m (1.1); 6.84m (0.0); 6.89m; pass; 6.84m (1.8); before ending with a foul. Her 6.89m is a seasonal best, and the second best of the 2011 World Lists.

Maggi, in a very emotional moment, interrupted the press conference she was giving to hug Dr Moisés Cohen, the orthopedist who performed surgery on her right knee. The jumper started to cry in the doctor’s shoulder.

“I wouldn’t be here, if it wasn’t for him”, Maggi said, wiping tears from her face. “I owe him a lot, for a well done surgery that gave me back the chance of competing again. I’m back, and I feel I will stay there for a while. The 2012 Olympic Games are a bit far yet, but my goal is to win the Pan-American Games for a third time. If all goes well, I will continue competing further.”

The stadium of “Parque Ibirapuera” was inaugurating a newly surfaced track, and that fact helped the shorter distances.

“The track is great, of the highest level,” Chambers said. “Sadly I wasn’t quite ready for competing at my best.”

The women’s 100m also displayed high quality performances. Nigerian Damola Osayomi won in 10.99 (a PB), becoming the fourth woman to run below 11 seconds in 2011 (American Carmelita Jeter is the world leader with 10.86). Aided by a 1.8 m/s breeze and by the 725m elevation of São Paulo, the race was fast not just for the 24-year-old Osayomi. American Alexandria Anderson was second with a PB of 11.01, and fellow American Mikele Barber was third with a SB of 11.14, her best performance since 2007.

On that same evening, the best South American distance runner, Marílson dos Santos, competed at 10,000m and produced a fine victory with 28:09.24. Coming from setting the South American Marathon record in London on 17 April (2:06:34), Marílson reached the qualifying mark for competing at the 2011 Pan-American Games. “I will surely run the 10,000m there, and perhaps the 5000m as well,” commented the 33-year-old dos Santos.

Going back to the Sunday’s Area Permit Meeting, 24-year-old Jamaican Rosemarie Whyte set a SB by capturing the victory at 400m with 50.93, the fifth fastest performance of 2011. Colombian Norma González, former World junior and youth championships medallist, was second with a PB 51.58, ahead of Brazilian Jaílma de Lima, who also set a PB with 51.66.

Victories in the rest of the events went to -

Johnson and Moreno shine in Uberlândia

Moreno, the two-time World champion, continued her return after maternity leave with a 72.89m performance (she has thrown 73.77m in March in Havana), beating Argentinean Jennifer Dahlgren (the South American record holder), who threw 70.57m.

Victories in the rest of the events in Uberlândia went to –

The 2011 Brazilian Athletics Tour will end in Rio de Janeiro, on 26 May with the “27º Grande Prêmio Brasil Caixa de Atletismo”, an IAAF World Challenge meeting.