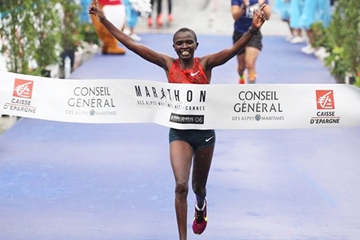 The 36-year-old Kenyan won in a personal best of 2:33:52 last year, but that makes her just the third-fastest in this year’s field.

Ethiopia’s Woynishet Girma, a former winner in Padua and Honolulu, has a best of 2:27:51 and has run faster than 2:30 on four occasions. The Marathon des Alpes-Maritimes will be her first race of 2015, but she is the only athlete in the field with a PB faster than the course record of 2:30:37.

Ethiopia’s Tigist Worku, the 2013 Bucharest Marathon champion, is also in the field.

The seven fastest athletes in the men’s field have PBs within one minute of each other, suggesting this year’s race will be a close one.

Kenya’s Bellor Yator has the fastest PB with his 2:08:39 clocking from 2012, one second inside the Marathon des Alpes-Maritimes course record, and will be hoping to do better than his fifth-place finish from last year.

Compatriot Moses Kurgat’s PB is just one second slower, but was also set in 2012. He finished third in this race back in 2011.

Victor Kipchirchir has the fastest season’s best of this year’s field. The 27-year-old Kenyan clocked 2:10:45 last month to finish second in Warsaw and has a PB of 2:09:13.

Kenyans Michael Kiprotich, Michael Chege and Ethiopia’s Tadese Aredo all have sub-2:10 personal bests from a few years ago and will also be expected to challenge for a top-three finish.

Barnabas Kiptum will also be one to watch. He led for most of the way last year, but was passed in the closing stages. Nevertheless, he held on to finish second in 2:10:29, taking almost eight minutes off his PB.