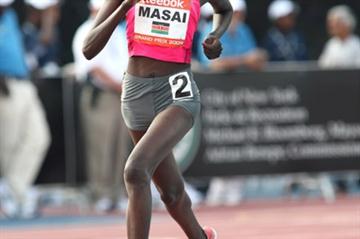 And his decision to reschedule his trip to the unique charity race, run annually with wildlife for company in the Lewa Wildlife Conservancy, was worth every bit of it.

The legendary former World marathon record holder (2:04.55), who held the 10,000m record at 26:27.85 (still a Kenyan national record), had no regrets as he enjoyed every piece of action in the race won in blistering fashion by the in-form Linet Masai with Lineth Chepkurui coming in second.

The 10,000m race was a final selection for Kenya’s team to the 12th IAAF World Championships in Athletics in Berlin, Germany (August 15-23) and with the first two across the line earning automatic qualification, Masai and Chepkurui can already start hunting for their Schengen visas.

The third runner will be picked as a wild card selection by a panel of Athletics Kenya coaches.

The men’s 10,000m on Saturday (27) will also be a straight selection race for Berlin with all the other athletes waiting for the national trials later next month to fight for the coveted tickets to Berlin.

Kenya’s men’s and women’s marathon teams for the Worlds have already been picked.

The season has started on a bright note for Masai, who is among a strong team fielded by the Kenya Police at the national championships.

In March, she led in the final stages of the senior women’s race only to be pipped to the gold in the final uphill sprint by compatriot Florence Kiplagat at the IAAF World Cross Country Championships.

On Friday, the policewoman was in equally good shape, running a calculated race, her winning time of 32:49.3 nine seconds faster than Chepkurui who was serving duty for the Armed Forces team.

“I’m happy to win the race and get a ticket to Berlin. The pace was a bit slow but I’m not concerned with that,” said Masai, who will feature in shorter races in Europe to build up on her sprint ahead of the Worlds. “I will now go and focus on improving on my sprint for Berlin.”

Chepkurui’s story was quite amazing. A few minutes to the race, she was moaning and groaning on the doctor’s couch with a nagging ankle injury that forced Kenyan team’s head physio, Peter Nduhiu, to work some magic that would allow her to soldier onto the race track.

And it worked, although the pain was almost too much for the battle-hardened soldier to bear.

“I can’t believe I finished second here. I was not sure I will even run by yesterday (Thursday, 25),” Chekurui said.

“My foot was sore and it had turned worse because of training. I had a hamstring injury on my left leg last year as we came into the cross country season. It is healed. Then I suffered the right ankle injury. But I’m sure I will be fit enough in time for Berlin.”

Drama in the heats

Friday’s action at the Kenyan championships was not short of drama.

The curtains come down on the Kenyan championships Saturday (27) with the highlight being the 10,000m men’s race that will see the first two across the line qualify for Berlin.

Then there is the small matter of other key finals to be contested including the men’s and women’s steeplechase, 1500m, 5000m and 800m, the winners taking away the much sought after bragging rights as Kenya national champions, tags that should make their appearance fees globally more attractive.

Elias Makori for the IAAF