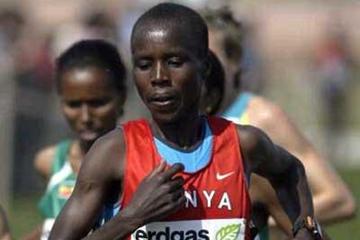 Masai, 35, was always to the fore and broke away in the finishing straight to come home in 12:43.

Kidane, 21, looked a little leg-weary when it came to the crucial stages, which was not surprising following her tremendous victory the previous day. The Ethiopian finished just one second behind Masai, but the Kenyan’s victory was fairly conclusive.

Masai had only started running seriously after she separated from her husband in 1999 in order to provide for her son, and the prison officer had shown good form in the run-up to these championships, with victories at Newcastle and Elgoibar, and runner-up spots in Seville and at both the Kenyan Prisons, and the national short course championships.

Jane Gakukyi, who was only fifth in the Kenyan short course championships, beat the Kenyan champion Isabella Ochichi to the bronze medal.

In fifth, Australia’s Benita Johnson was one position lower than her superb fourth place at the 2002 IAAF World Cross Country Championships in Dublin. The 23-year-old was nevertheless the first non-African runner home. The first European was Alla Zhilyayeva of Russia.

Tirunesh Dibaba of Ethiopia, the winner of the junior race 24 hours earlier, was seventh.

After Kenyans and Ethiopians had filled eight of the top 10 spots, Kenya won the team race from Ethiopia and Morocco.

Unseasonably warm temperatures and the chance to cheer one of Switzerland's most famous sportswomen, Anita Weyermann, drew large crowds to the national equestrian centre on the second day of this two-day championships.

Weyermann, 25, won World junior titles on the track in 1994 and 1996, the European cross country title in 1999 and finished fourth in this race in Marrakech in 1998. But here she could manage only 40th, leading home the Swiss team to 14th place overall. It didn’t stop the crowd’s enjoyment of the race.