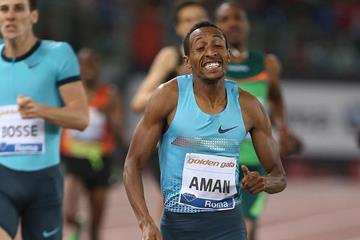 This year’s Golden Gala Pietro Mennea, the 2015 IAAF Diamond League meeting in Rome on 4 June, will feature 18 reigning Olympic medallists and 27 athletes who finished in the top three at the 2013 IAAF World Championships, the organisers announced at a press conference on Tuesday (5).

In addition to the already-announced names, which include Olympic champion Renaud Lavillenie, the stars of the sport who have been added to the meeting include Lavillenie’s compatriot and world triple jump champion Teddy Tamgho.

The third man in history able to jump beyond the 18-metre barrier, with 18.04m in 2013, will face the USA's Olympic silver medallist Will Claye.

The men’s shot put will feature a clash between Germany and the USA, with the previously announced two-time world champion David Storl taking on the top US throwers Christian Cantwell and Joe Kovacs, the latter having recently set a world-leading 22.35m.

The magical history of the Rome Olympic Stadium’s high jump fan, where Stefka Kostadinova set the still-standing world record of 2.09m, has attracted back Blanka Vlasic.

The women’s 100m hurdles will be a star-studded race with the past two Olympic champions Dawn Harper Nelson (2008) and Sally Pearson (2012) as well as world champion Brianna Rollins, the latter a winner in Rome in 2013.

A loaded men’s 100m sees three-time Rome winner Justin Gatlin up against Nesta Carter, Mike Rodgers and the evergreen Kim Collins while France’s Christophe Lemaitre is in the 200m.