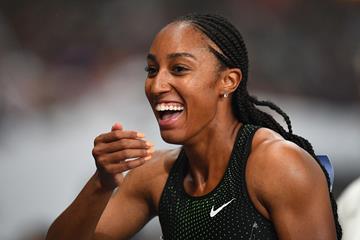 McNeal and Tuka confirmed for Lievin

World champion in 2013 and equal fourth on the world all-time list for the 100m hurdles, McNeal’s biggest successes to date have been achieved outdoors, but she is also a proficient indoor performer. In 2016 she clocked a world-leading mark of 7.76, a time that ranks her 14th on the world all-time list, and she went on to take the silver medal at the World Indoor Championships that season.

The 28-year-old, however, has never contested an indoor race in Europe and her last indoor race was back in 2016.

Tuka has a bit more recent indoor racing experience, having competed at the European Indoor Championships earlier this year. The middle-distance runner from Bosnia and Herzegovina holds national indoor and outdoor records for the 800m (1:42.51 outdoors, 1:46.33 indoors) and for the 400m (46.15 outdoors, 47.14 indoors).

The 28-year-old broke through in 2015 with his 1:42.51 topping the world list for that season before going on to take bronze at the World Championships in Beijing. He bettered that in Doha two months ago, taking the silver medal in 1:43.47, the second-fastest time of his career.