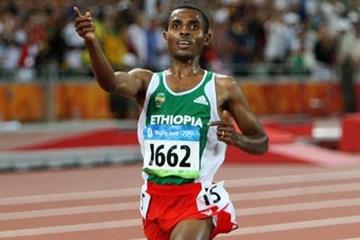 In many ways, the men’s 10,000m final was a virtual rerun of the final in Athens four years ago. Several of the key names remained the same. Many of the team tactics were revisited. Even the biggest applause during the introduction of the field was directed towards the same runner, Ethiopian legend Haile Gebrselassie. And the victor again was, as expected, Kenenisa Bekele.

One key difference was Bekele’s winning time, four years later considerably faster at 27:01.17, which sliced nearly four seconds from his Olympic record run in the Greek capital. But the dominating way in which he’s able to win 10,000m races, has changed little.

The picture definition for the term ‘composure’, Bekele bided his time until taking the lead and unleashing his vicious kick. Over the final lap, he more closely resembled a 400m sprinter than a man who had just completed 24 laps of the track.

The supporting cast too seem to have comfortably settled into their roles. The silver went for the second straight time to Sileshi Sihine, who crossed the line in 27:02.77, also under the previous Olympic record.

“I was trying hard but the last lap was too fast,” said Sihine, who also finished behind Bekele at the last two World championships. “But it’s good for my country that we got two medals.”

Gebrselassie, fifth in Athens four years ago in what he said would be his last track race over the distance, was sixth this time, but still considerably faster at 27:06.68. Zersenay Tadese, the defending bronze medallist, could do no better than fifth (27:05.11), as he was forced to contend with the strong Kenyan duo of Micah Kogo and Moses Masai. The pair were virtually inseparable at the line, with the edge given to Kogo as both were credited with a 27:04.11 performance, also under the previous Olympic record to help round out the finest Olympic final ever.

The pace was quick from the outset, with Eritrea’s Tadesse Kidane doing much of the early work, leading the pack from the initial laps through 5000m, reached in 13:48.00. Several lead changes transpired over the final four kilometres, with the pack of challengers finally reduced to six with three laps to go. Even Gebrselassie took his turn with the lead, as did Tadese.

At the bell, Bekele lead an Ethiopian 1-2-3, but Gebrselassie’s legs, for some time now more accustomed to the Marathon, finally failed him midway through the back stretch when first the Kenya duo, and then Tadese, went by.

Bekele is already considered by some as the finest distance runner in history, but it’s a characterization he’s not yet willing to accept.

“I have to have many years of winning before I can compare myself to him,” he said. Barely 26, he still has ample time to fill whatever void he feels need filling.