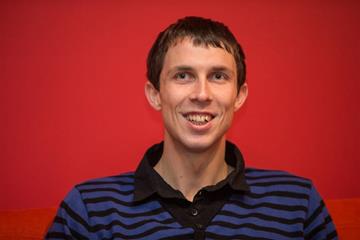 Ahead of Saturday’s 2013 World Athletics Gala in Monaco, 2013 IAAF World Championships High Jump gold medallist Bogdan Bondarenko spoke to the press about his past season and his future goals on Friday (15).

Asked to pinpoint anything that didn’t go right for him in a season during which he became the World champion, improved his personal best and Ukrainian record to 2.41m as well as being voted European Athlete of the Year, the 24-year-old shifted his 1.96m frame for a moment on the plush red sofa he was sitting on before responding with a grin: “I can’t. I think this year has been perfect for me.”

As one of the three finalists for the IAAF World Athlete of the Year, along with Usain Bolt and Mo Farah, Bondarenko added that winning the award would be, “a present for the new season.”

Having attempted the World record height of 2.46m both in Lausanne – where his jump of 2.41m put him equal third on the outdoor all-time list with Igor Paklin behind Javier Sotomayor and Patrik Sjoberg – and at the World Championships, where he won again in audacious fashion with 2.41m, Bondarenko is quietly confident that he can achieve the new mark.

Asked how he has always managed to produce his best on the big occasions, and despite carrying injuries – a pattern which occurred when he won the World junior title in 2008 and then the European under-23 title in 2011, and which was repeated in Moscow this summer as he again jumped 2.41m to head off a strong field – Bondarenko responded: “I think it is important to prepare your season towards one or two main competitions; and it is the motivation of the competition that works for you. When I am in a championship, I think ‘I must jump, and I must win’.

“I think we have some talented young high jumpers around now, and the next three to five years may be very interesting for the High Jump. I think we have many athletes who can jump very high.”

Bondarenko said he would not be competing at next year’s IAAF World Indoor Championships in Sopot, Poland, as he is concentrating on winter training for the next outdoor season.

He has started working for the first time at altitude in the Sierra Nevada mountains in Spain.

“It is good for me in Spain because I do not have too much attention and too many phone calls. In Spain I can sleep, it’s better for me!

“I was shocked when I first went to the mountains, because I have to go step by step by step, and after five minutes I am so tired I must stop. It has been so hard for me, but it is good for my health, and if I can bring some of that conditioning back down with me when I compete next year I think I can have a fantastic season.”

Reflecting on his current success, Bondarenko recalled the importance of 2009, when he required operations on both ankles after competing at the European Indoor Championships in Turin where he equalled his personal best of 2.27m in qualifying, but was unable to do better than 2.15m in the final, finishing ninth.

“We must jump in the qualification, and the next day in the final. This is no good for me, for my legs, I need rest,” he said. “This was my first senior international championship, and I finished in a lot of pain.”

The operations were a success, although he has not been free of injury since, making it clear after his Moscow win – where he took the risk of passing on 2.38m, a height already cleared by two rivals, before securing gold with a clearance of 2.41m – that he had had to be sparing with his efforts.

He smiled as he recalled the reaction of his father and coach, Viktor, who was watching in the stands. “For my father, who knew my condition, watching me was…” and he mimed watching an event through fingers.

For 2013, however, the torment is over for Bondarenko senior. And 2014 holds the promise of further glories.